On Friday June 29th, 2001, a bizarre and antiquated ritual occured outside the Exeter Guildhall, to kick off the festivities of this year's Exeter Festival. According to the pamphlet being handed out by a man in a 'town cryer' costume (the front of which is shown above, and the contents of which are reproduced here):


"The annual ceremony of the Proclamation of Lammas Fair dates back to before the Normal Conquest, more than 900 years ago...The old Lammas Fair began at noon on 31st July, but has subsequently been altered in recent years."

"The Lammas Fair White Glove was displayed during the Fair and was a sign of Royal protection of the peace. The large, leather, stuffed glove is attached to a long pole and is decorated with ribbons and a garland of flowers...Prior to the hoisting of the Glove, a Proclamation is made to declare the Fair open. The text of the Proclamation, issued at the time of Edward III in 1330, remains unchanged." 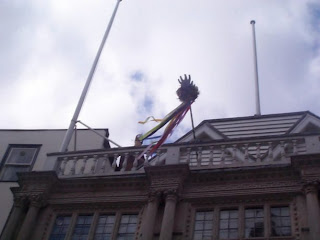 "Many towns in England still retain their ancient fairs but in most places the reading of the Proclamation and the hoisting of the Glove have been abandoned. Some of the fairs have survived chiefly as pleasure fairs, but many are purely agricultural."

"In the present celebration of Lammas Fair in Exeter, the Mayor departs from the Civic Centre in the former Sheriff's Coach with a procession of school children and a band. They process to the Guilhall via Paris Street and High Street and a mace-seargant leads the procession, carrying the Lammas Fair Glove."

"On arrival at Guildhall there is a brief ceremony for the opening of the court, and the Mayor reads the Lammas Fair Proclamation. The Lammas Fair Glove is then hoisted from the Guildhall verandah."

The Interdimensional Pixie Broadcast Network admits to be rather fond of such curious and surreal ceremonial behaviour. We were particularly amused to witness the assembled people in fancy dress, aristocratic women in those funny hats, schoolkids' samba band, et.al. enthusiastically declaring "God Save the King!" as a stuffed-glove-on-a-stick was hoisted in order to open a craft fair.

If it were up to us, there would be things like this happening every day in Exeter.

We think that it's a bit of a shame, though, that the timing of this Lammas Fair has been changed. Lammas is an ancient harvest festival, the Celtic 'quarter-day' midway between the Summer Solstice and Autumn Equinox, and has been celebrated at the beginning of August since neolithic times. (One of the most interesting examples of such a Lammas Fair was the Tan Hill Fair which occurred near Avebury in Wiltshire. Recent attempts to revive this fair met with curiously overwhelming police opposition in 1995.)

Such concerns aside, we were rather taken with the idea of the ceremonial stuffed-glove-on-a-stick, and have therefore created (as Americans have been known to do) a new tradition.


Here is the hoisted glove, in all its glory: 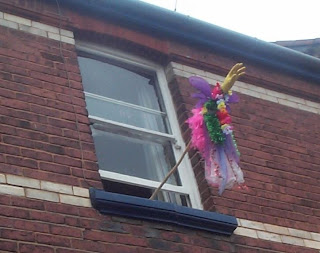 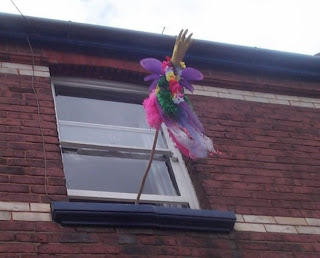 Here is a portrait of the glove itself: 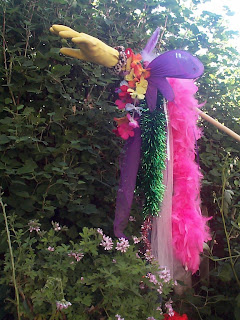 Colour prints have been presented to the Exeter Fringe Festival office.
"The Interdimensional Pixie Broadcast Network is proud to maintain this colourful and modern tradition."

Get in touch
IPBN Home