"I have seen the signs. They're gateways into the nature of what they are. And we're all going there now. Because it says so."
Pok (The Spacegoats )
On this August morning, fairies appeared in Union Road (and they seem to have spontaneously manifested in the picture itself - click for a closer look).
A snail on the eastern end of the Topsham Road. We were told that this was removed by a member of the public, traded for two portions of fish and chips at the Countess Wear chip shop, and has ended up on display at a shop in Exeter calledSouthWest Reptiles
The Tibetan Buddhist Sri Yantra facing incoming traffic on the western end of the Topsham road. "The Sri Yantra is a powerful aid to meditation. Increasing in complexity from the centre outward, the pattern helps the observer to look symbolically back to the moment of creation, both of the universe itself, and of the acts through which the mind ceaselessly brings the outer world into existence." (from The Secret Language of Symbols by D. Fontana)
A fine example of Celtic art on Queen Street. This is a very ancient spiral design called the triscele or triskellion from the Chi-Rho page of the Book of Kells. It was illuminated by Monks in the 9th century in the style of Iona where it came to rest. The design suggests a fractal geometry. "...intricacies, so delicate and subtle, so exact and compact, so full of Knots and Links, with colours so fresh and vivid, that you might say that all this was the work of an angel, and not a man..." (Cambrensis)
A semicolon on Fore Street. George Orwell actively campaigned against the use of the semicolon, believing it to be a contributing factor in the erosion of language and meaning. He argued that the semicolon blurs the distinction between the comma and the colon, thereby obscuring the exact nature of the relationship between the two phrases it sits between. This is a shame, as they're our favourite kind of punctuation.
A squid on Bad Homburg Way (on the edge of Alphington). Once in place, we decided that this one was probably our favourite.
Tree/Temple sign on Cowley Bridge Road, opposite the Esso garage. Groves of trees were sacred centres for the ancient Britons. The Romans made a point of cutting them all down. Many churchyards contain yew trees which are older than the churches themselves - in many of these cases the tree was the church. "Ancient peoples widely believed the tree to be infused with an abundance of divine creative energy (often personalised in the form of supernatural creatures) which could be consciously harnessed by the adept, allowing access to other states of being." (from The Secret Language of Symbols by D. Fontana)
Blobs on Blackboy Road. Here we were possibly exhibiting an unconscious Miro influence.
A dove with olive branch brings a bit of peace to the rather noisy and hectic Marsh Barton Industrial Estate (Alphinbrook Road roundabout). A symbol of the end of the great flood, when it brought an olive branch to Noah, the dove is the classic representation of peace, standing for the Holy Spirit.
The Eye of Horus looks southeast down Mary Arches Road. Horus was the ancient Egyptian lord of the skies.
A seahorse, of which we were particularly fond, was removed within a few hours of being installed on Bonhay Road. We hope that it found a good home.
Eh? A question is posed outside Henry's Bar at the bottom of Mount Pleasant Road.
[update]
All of the signs were discretely tagged with a web address, as (1) we were hoping for some feedback from the general public, and (2) because we liked the idea that someone who'd seen one of the signs could indirectly experience all of the others. We got the following email from Steve Stewart:

"That was quite fun. However, all the signs have gone and are now safely locked up somewhere secret. Ransom note will follow shortly. I managed to get all of the signs except the Seahorse and Tree/Temple. All the others are with me. Photographic evidence can be sent if required."

At first we thought that "Steve" was missing the point somewhat. When we installed the signs around Exeter, we were freely giving them away to the public at large. We weren't expecting to recover them, as we imagined that they'd be removed before too long, either by the authorities or by individuals who particularly wanted a given piece. Had he not suddenly removed them all, we thought, they probably would have stayed up considerably longer and been seen by a much wider audience. We were quite impressed that someone felt motivated to somehow get involved with our work, but a bit disappointed that it had to be what we saw as such an unimaginative and selfish kind of involvement.
However, "Steve" has since passed on the following information which we feel somewhat vindicates his actions:

"While I was driving around the city on the day, the local radio station was reporting on the locations of the signs as people were calling in on their way home. Of course I went about looking for them and came across the "Blobs" on Blackboy Rd. That's where I found the URL for your site. I called a friend who logged on straight away and told me that the pictures had already been published. Without giving too much away, I had a friend fax me the entire web site while I was still driving around. I had the fax which gave me the location of all the signs within about half an hour. The rest was easy. Just follow your instructions and get as many as possible. The radio station was saying that Devon County Council were watching their cameras and anyone seen putting any more up would be in big trouble. So they thought that the signs had only just gone up. The POLICE also called the radio station to say that they were looking for the signs and would remove any they found. I also hear that the Police were under the impression that it was the local radio pulling some sort of publicity stunt. So I got them all before the Police did."

We received the following email from the This Is Exeter online guide:
Thanks for the email.
I've just had a look at the art. Brilliant, really funny! Do you want it to go on our arts section?
Yours sincerely
Sarah Elliott
Web Editor
This is Exeter

For what it's worth from a bunch of people who were actually arrested by the police for 'guerilla ontology' in Exeter back in 1984, please consider yourselves to be Most Honoured Wudpersons. Respect!
Further communication is indicated...
Yours in WUD,
Cliff, Dave, George.

This came from Paula and Hugh in Spain
As the representative of "we are snails and we matter! Please notice us". we would like very much to thank and acknowlege your brave and most conscious actions. We were also most surprised by the buddhist symbology because as I am sure you know, we are a largly Buddhist organisation. We look forward to staying in touch and hearing of and seeing your future work. We will of course send in any reports of newly enlitened car drivers leaping out of their cars to act as lollipop persons for the smaller inhabitants of the universe. May I leave you with a pseudapodial handshake?
Yours,
snailscount@hotmail.com

Check out these people's site! One of the most interesting and unusual that we've seen.
nice work--we'll link
cheers
cliff
Turning information resources into emotional capital.

From Dave and Bek in Staffordshire:
"You rock. You and your associates are beautiful people. Power to ya."

From J.B. in Spain:
"How amazing! I am overjoyed that even in Exeter the powers of life, excitement and diversity are alive and kicking."

From Michael Evamy:
"I just stumbled on your gallery of signs and I think they're inspired. I am a design journalist and I'd love to give them more publicity. I am planning a book [the book has since been published] currently with Calmann & King on 'visual shorthand' - information design and its subversions. It is still early stages but I'd like to know if you would agree to us featuring the project and some photography in the book crediting yourselves (you'd better let me know who you are!) of course. Let me know if you're OK about this, and a bit more about the project"

From roadsign enthusiast Bob Kenyon:
"Wonderful. I've put a link to your site from mine. And I've been motivated to add those small unconsidered animals to my site also.
More please. 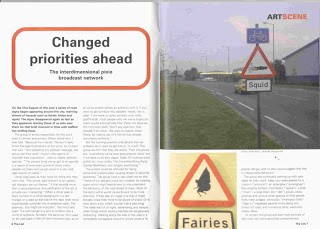 The Interdimensional Pixie Broadcast Network was pleased to discover that our first exhibition received a full colour double-page feature in the ArtScene section of the October 2000 edition of The List, the ubiquitous glossy 'what's on' magazine for Exeter.

If you know of any websites, publications, individuals, or arts organisations which might approve of our work, please inform them of this site. Thank you.

[All pictures are anti-copyright. Reproduce them wherever you want!]
Get in touch
IPBN Home