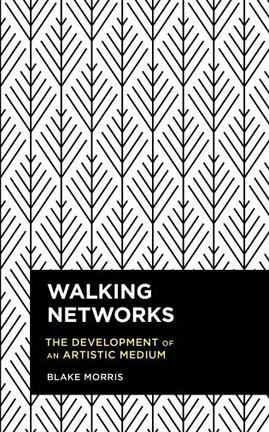 ​
Blake Morris’s book is a wonderful introduction to the walking practices that have emerged in the last decade. Importantly, Morris puts the emphasis on conviviality and disruption (of physical restrictions and subjective assumptions) and on the “actually going” rather than the contemplation or production accruing from walks. Morris argues for walking as a “distinct artistic medium” that “transmits the artwork through the audience’s walking body”; this shifts the focus from the solo walking artist to a relational work made with, rather than for, others. The art is in the bodies “going” not the performing of bodies for spectators; this experience of going is “the location of the artwork” not the artefacts and documentation that might be secreted as a result.

Walking Networks is a powerful reassertion of the corporeal in walking art and opens up a strong embodied site for militant egality and access based in collaborative networks and dispersed networking. It also risks, by downplaying the products of walking, a return to a diaphanous romanticism privileging a limitless and limitlessly manipulable ‘experience’ (which has its own virtues) but guards against the exploitation of subjectivity by placing a strong emphasis on what Morris borrows from Rosalind Krauss to call the memories of the ‘walking guilds’, the “collective memory of a guild of practitioners” that guides the development and output of the medium rather than “any particular material form”.

While the book loses something by its ascetic downplaying of performance-like aspects of walking arts, this helps it to form a powerful alternative mode for the gathering of subjectivities “through discourse” rather than presentation; but what it loses is the kind of critique that ‘performance studies’ can bring to banal walking practices that avoid real scrutiny by being ‘participative’. In the moment of its writing, Walking Networks bends the stick in a good way, re-establishing the convivial and collaborative in the face of both commodified representations and their dispersed performative iterations.

This ‘bending’, however, creates a trap for the book, and in its conclusions it is overly generous to the embrace of “digital interfaces” and their “benefits of support” in making “the medium more visible” and providing “more opportunities for public engagement”; all of which ignores the effects that digital forces play in changing content and their power to drain experience of embodiment. Perhaps, in recognising this, Morris draws performance back into his consideration in the form of speech acts and storytelling, using Walter Benjamin’s formulation of the listener becoming the teller (as in Diana Taylor’s idea of “repertoire” and bodily transmission) to describe “the participant’s movement into the story of the walk”; turning “every participant into a teller of tales, privileging storytelling over information in [a] desire to engage with the world”; dispensing with the showiness and exhibitionism of performance in favour of an immersion in its bones.

In establishing conviviality as central to walking art, Walking Networks bodges many of the accepted canons of walking arts, reconfiguring the practices of prominent walkers like Dorothy Wordsworth, Morag Rose and Michèle Bernstein in order to show where the subjective and the collaborative, (even the “solitary and social” in the case of Romantic walkers), entangle. It is in drawing out the networks that have emerged from and have elaborated on the direct personal relationships of walkers, that Morris’ book comes into its own; with the first coherent account of groups and initiatives like walk walk walk, Walk Study training Course, Loiterers Resistance Movement, Walking Artists Network, Walk Exchange, The Walking Library, Walking Women, Deveron Projects and so on, which all in different ways – from “walking ensemble” to “mobile classroom” – create or facilitate artworks that do not “belong to any one individual, but instead reflect the footsteps and perspectives of a network of walkers”. Morris’s account is not ‘rose-tinted’, and he detects contradictions and failings within this generally positive narrative; such as a Deveron Projects’ sponsored work in which the artist “[I]n his position as artist.... exerted power over the participants to foster social tension that served his artistic gesture”.

Morris then detects a model in the Walking Artists Network that is particularly exemplary; “an online community with which to take things offline”; this model will be crucial in the years to come. For the commercial and social pressure (exacerbated by pandemic) is to upload the body to digital, to make an online presence as the defining output of the walk, to re-commodify what was dematerialised and re-materialised, deterritorialised and reterritorialised over the last decade. Morris shows where he stands by peppering his text with ‘walking exercises’ which he asks his readers to go out and do, punctuating their reading with a focused wander, shifting from documentation to scores for re-enactment, recovering what we may already be in danger of losing: the making of walking art as (in Rebecca Schneider’s words) a “site of any knowing.... body-to-body transmission”.

In conclusion Morris restates his central argument that walking art is generated by a “contemporary guild of practitioners... supported by the memories of the medium”, but he has already given a nod to those “knights” that are allied to Rosalind Krauss’s “guilds”; which suggests that there is still a place for the partly solitary walker who, like Dorothy Wordsworth re-entangles deep subjectivity with convivial wandering, or, like Kubra Khademi’s walk in metal armour through Kabul streets and William Pope L.’s supine traversal of Broadway, pioneer new disruptions and subversions; these “passports to walking offered through the mythologised walks of.... practitioners form[ing] the base for the memory of the medium” then carried by the “collective guild of walking practitioners” who in their turn “form a specific artistic medium”. Walking Networks presents an inspiring vision; the challenge now, in the face of disembodiment and intensifying digital commodification, is for future walking to sustain, enhance, share and transfigure it.


Go here for all Crab Man / Mytho's other reviews