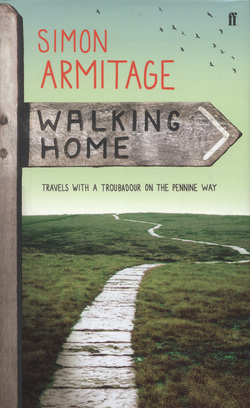 This could have been a very special and exemplary book for exploratory, aesthetic and disruptive walkers. And for about a third of its length, it reads like it is. Then the wonder collapses. Walking Home is still a highly readable account of poet Simon Armitage’s southwards pilgrimage down The Pennine Way, but more interestingly it gives away, unintentionally,  just what a tricky ideological struggle the apparently simple of walking is. And, for any pilgrim following on, it reveals where some of the traps are set.

The barebones of the journey: 256 miles in 19 days, much across moors and peaks. Some gruelling territory, certainly for a 47 year old poet with a dodgy back living a fairly sedentary life and with little special preparation. So, there is an ordeal here – not for nothing, as they say, does Armitage cite Odysseus and Gawain. He takes no money with him, but sings for his supper, reading his poems each evening (other than World Cup Final day) and collecting donations in a sock. Sometimes he walks alone, but often he’s accompanied. Most nights he stays with folk who have offered to put him up in homes along the route.

Along the early miles, Armitage muses around the inhabitation of places and things by experiences, the way the terrain can ‘turn’ on a walker, the unreliability of instinct in mist, the cold sweat of lostness, the futility of walls penning in populations, the closeness of the military and moments on a journey that feel like blessings. Armitage makes sinister finds: a teddy bear target, a decapitated scarecrow in blue overalls. He tests the propaganda of the walking organisations and finds it wanting:  he is mostly “ALONE”. He begins to notice how he’s turning the landscape into potential venues for poetry readings. He hallucinates a liquid figure far off, is spooked by cows and growly dogs, learns how to read a wall, and struggles with hot-drinks machines and tourism videos to make his poems heard. He makes wonderfully subjective associations – creosote and telegraph poles send him to a shed crowded with herbs and hogweed. He gloriously captures the wonderful volatility of walking groups: part children led by a Pied Piper, part deadly devotees from ‘The Wicker Man’.

Somewhere around Dufton, the narrative is dulled. From then on, geology often seems to be the only narrative and Armitage’s prose even descends to tourism brochure level: “Hawes’s reputation for old furniture emporiums and pastry outlets seems entirely justified”. An extended comic turn by a visiting friend called Slug doesn’t quite come off. The wonderful interweaving of multiplicitous layers of the early miles is homogenized. Why? Well, there are some giveaways: Armitage is visited by his family for a day and this throws his focus. He is no longer fully in his journey, he’s already partly back home, unaware of the need for a resolute ‘breaking from’ as a constituent part of disrupted walking, no matter how temporary. A little too much comfort undermines the pilgrimage element. Too many of his walking companions are rangers with professional tedious agendas or men announcing each furlong walked.

Armitage is also loaded down by a huge and heavy suitcase that he calls “the Tombstone”. He’s brought part of his office with him, and this necessitates the repeated interruption of his walk by helpful motorists who have volunteered to transport his belongings from host to host. Car rides chop up his journey; perhaps contributing to his failure to find the overarching narrative of his quest, grasping instead for Homer.

There was a virtue to be made from the denial of journey that Armitage clearly finds a necessity, but without any grounding in traditions of alternative walking he cannot see this anti-opportunity to directly confront the problem, to face the dragon of “[A]nother week of walking and talking, the plod, plod, plod... the blah, blah, blah”, just as at the very end of his journey he turns back from a dark, misty Kinder Scout. He satirises rather than mythologises those he encounters. His weariness seems to spawn some rather ungenerous  acts at his readings, for which he describes himself as ‘stained by sin’; yet there was something more, aesthetically, to be made of that tiredness, if only he’d been aware of the ‘performance’ of his journey (strangely he has little to say of the affect of reading his poems until the very final reading).

There are little jewels found by the path: the stealing of Ted Moult’s feather, a zip fastener guarded overnight, an entire village cricket team and a group of Orthodox Jewish schoolboys “their dark ringlets wet with sweat” passed on the path, and Armitage’s reflection that the spare rooms he sleeps in are “memory vaults” but the memories are not his. But in the end this is a book that falls a long way short of what it promised to be; and, as id he unconsciously recognises that, Simon Armitage lets go a big ‘tell’: he has accidentally trapped his journey into the habit and routine that he enjoys at home, “I lace up my boots and head into the hills, then do the same again the next day”. He ends in a car park, met by his Dad, waiting in the car, “my mum pulling a plastic recycling sack out of her bag and pulling it over her head”.

Ah, the frustration! Simon Armitage has all the poetry and much of the instinctive feel for multiplicity to have written a great walking book. Unfortunately, he never quite left home.