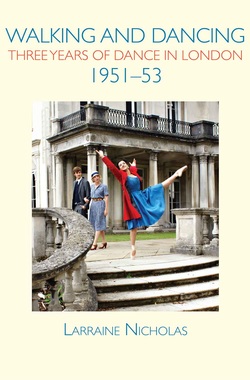 Larraine Nicholas claims to be no psychogeographer, yet pays respect to Machen, Ackroyd, Sinclair and Self in an early section she titles ‘Walking as methodology and frame’. Her way into three years of dance, mostly ballet, is a series of walks. Her text ambles and rushes, dives in and savours, exits and traverses. She scours patches of (mostly) central London; the voice of her text is a subtle blending of witnesses, an apparently seamless shifting between the moods and enthusiasms of a handful of contemporary scrapbook and journal keepers. At times the voice is infuriatingly conservative and conformist, at others seemingly seduced against her better judgement into adventures and “sordid” (a word used often) fictions.

Three themes from the London ballet scene of 1951-53 sound again and again. The first is the minute stitching of royalty with dance, the invention of its entanglement and the language of order and primacy, of ‘prima’ and ‘principle’ just as with princess and prince. At one point the anonymous and ambulant voice speaks of a ballet as “a whole series of hierarchies nested in each other”. Shockingly, the “princess” of the 50’s ballet, Margot Fonteyn, the only dancer to feature in Picture Post’s list of ‘New Elizabethans’ in 1952, was again, in 2012, the only dancer on a BBC list of “sixty Britons who ‘defined’ the past sixty years”.

The second theme is something, astonishingly, barely noted as a pattern. Again and again these dance-goers are seeing work not made by white Europeans, but by Berto Pasuka’s Ballet Négres, the sacred dances of Uday Shankar, Ram Gopal and Mrinalini Sarabhair, Bulbul Chowdhury and His Oriental Ballet (performing a dance drama “about the man-made Bengal famine of 1943”), Pearl Primus dancing ‘Strange Fruit’ about lynchings or Katherine Dunham and Company with dances from Brazil, Trinidad and the plantations. Yet they barely feature is any broader discussion of dance; Nicholas’s theatregoers are worried about a ballet frozen in the nineteenth century, while all around them the world is shifting.

The third theme is the entanglement of ballet and the polite end of the sex industry. It is fascinating to read of how the nude shows at The Windmill Theatre subsidised, through its proprietor Mrs Laura Henderson, the Markova-Dollin Ballet, how The Windmill’s choreographer Keith Lester was a founder of the Arts Theatre Ballet which would merge with Ballet Rambert. As Nicholas’s narrator comments, the Windmill “feels like a hundred miles from the stalls of the Royal Opera House, but is really one end of a continuum of dance performance”. Larraine Nicholas’s triumph is to use walking in such a way that she brings this continuum, by detailed observations and juxtapositions, to a vivid and repeatable life.