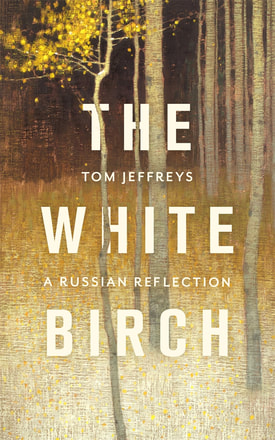 ​
I love the kind of book that The White Birch is. Not just for what it says and how it says it, but for the fields it unrolls in order to find those things and for the journey across the unravelling plains. There’s a lot of journeying in The White Birch because there’s a lot of Russia to cover; the birch being that country’s national tree, thriving in its disturbed ground. The lifespan of a birch is similar to that of a human being and there is a lot of cutting short of both here.

Symbols do plenty of work in Tom Jeffreys’ book, and he is expert in understanding them, tracking how they dodge and change. The White Birch is an adventure story that combines the thrills of an intellectual howdunnit with visceral ordeals. Mysteries and contradictions lead the author-detective into dark and threatening forests and through the remote villages, but, satisfyingly, the most intense confrontations with the meanings of birch are in more sedate parks and estates and around the canvases of paintings. Here, Jeffreys combines a vulnerable nous with an inquisitiveness that overcomes what he knows; he is always ready to be overwhelmed by what he finds. And there are some very dark things indeed here, for a dip into the national symbolism of Russia quickly carries the detective beyond the quirky nonsenses and telling ironies to the mass deportations of peoples, industrial murder, state-sponsored homophobia, leader-worship and the weaponising of nature for uses in the exclusion of those deemed too sophisticated, too fabricated, too eccentric or too Jewish to be deemed ‘natural’.

Again and again, Jeffreys navigates down through the layers. Whether it is in the public grounds at Abramtsevo, the hyper-modern Muscovite park of Zaryadye or the wounded woodlands near Pripyat, beneath the claims for timelessness and spontaneous naturalness he uncovers the careful composition of nationalism, the static misrepresentations of unstable living systems as “the natural order of things” and tendencies to masochism and servility in the repeated deployment of the birch as a “symbol of humility and suffering” (usually female). Ranging across folk-pop, ambiguous contemporary art, nineteenth century Russian prose and dank Soviet nastiness, Jeffreys’ voice is always light and ethical, attending to surfaces, timeslips and weird discrepancies, but never far from significance and history. He brilliantly explains the “underground network of interconnected roots”  within the comical contortions of Stalinism and Putinism, the enduring popularity of nineteenth landscape painting, the gymnastics of the picturesque, how ‘eternal’ and ‘timeless’ are unremittingly partial and historical, and that the garden designers noted for their authenticity were trained in theatre.

As well as all the good stories, there’s fabulous writing here – “a tree that is maybe always in quotation marks”, “‘The medium is the message’, wrote theorist Marshall McLuhan.... But not in medieval Novgorod”, “the backdrop is never simply a backdrop; it is the land that is being fought over”, and so on – but maybe most powerful of everything here is the careful and funny depiction of how a culture constructs a symbol that means the opposite of itself; how the wildness of the birch is only really understood by the urban Russian and everything else is a horror already conjured by Anna Akhmatova in 1940 when she wrote as a woman called to return home: