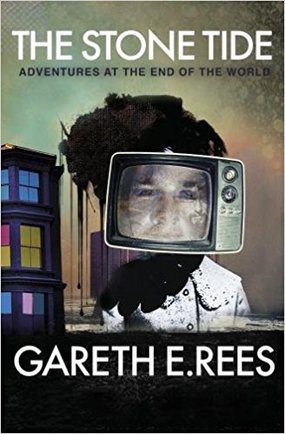 This is a remarkable book. In one sense it is such an easy read; the elegance of the storytelling and the author’s feel for the absurd and yet important detail draws the reader smoothly and pleasurably along. It is not so easy on the emotions, however. The Stone Tide takes us to some very dark places; the death of a dear friend and its relentless returns and impacts upon the writer, the collapse of a relationship, and the flipping of the meaning of psychogeography so that it bears down upon the writer rather than bears him up in his melancholy.

The main plot of The Stone Tide is the hollowing out and deconstruction of a place and what happens when that renewal does not come quickly; and maybe will not come at all. It is about a failed attempt to re-found a relationship, the author with his wife, through the radical renovation of an unkempt and clumsily converted house in Hastings. This might have been a comic aside, a ‘Money Pit’ sub-plot, but Rees’ close attention to the former residents’ accretions fixes the house and him in its past, levering him off into his own preoccupations. The house – that will throw up, among other things, a nailed heart, invasion by bluebottles and a birdman under the wallpaper – is dragged back from its coming part as future home and into the supporting role of gothic landscape.

This book is very like Arthur Machen’s The London Adventure in its form; setting out to be one thing – in this case, a weird history of Hastings – it is diverted into something else; the haunting of a man by himself. Rees’ fascination with the entwining of occult figures, mystics, chancers and fakers with odd fatalities and technological change traps him within their own narrative coils. He becomes told as much as teller. In its picaresque way, The Stone Tide is also a wholesale and problematic renovation of psychogeography; for whereas the ambulant discipline’s dispersal of meaning in ambience and its diffusive  connectivity can usually be relied upon to defer and redistribute the psychic to the terrain, in The Stone Tide it all comes curling back on Rees.

The result is that Rees has added an ethical dimension to psychogeographical writing that was not there before. Any tendency to hoover up the resonances of the terrain and turn them into fine stories with distinctive ambience is dispelled by The Stone Tide. This book makes clear that these are places not literary backdrops, that they are sites with specificities that can wedge in the flesh of reader and writer alike like thorns on a bramble; they can break a body like jagged rocks can. The heights that uncover the vista can also be the stage for fatal falls. This ‘cost’ empowers Rees’ prose descriptions of Hastings with a descriptive, psychic and moral force. We not only thrill to his evocations of the hallucinatory caves, the enigmatic arches, the seductive submarine wreck, the comic-fatal rooftop fumblings, but we also count the cost of the fakes, miasmas and spectacles that issue from them.  This is not just a book about haunted places, it is a book that stalks and haunts its readers. Gareth Rees has taken us all to a new level with The Stone Tide.