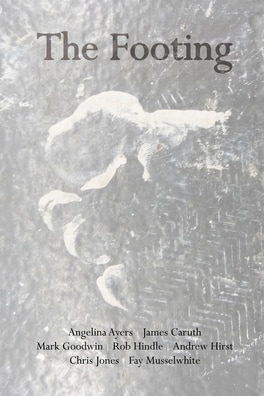 “The bone in her heart grows up past her throat....
she can’t talk it away so she walks it
down by the river’s raw bite”

The opening of Fay Musselwhite’s ‘Impasse’ characterises the urgency (and the occasional desperation) of this fabulous collection of mostly Sheffield writers who carve words out of the necessity of putting one foot in front of the other. There is a harsh unfairness to the ordering of that footing, never pausing to be at rest until, in a ‘Quaker Grave’ with James Caruth, you are

“strung out
like the power lines bordering the sky
wondering why I’m drawn
to this famished field”.

For there’s little space for luxury in the treks of these slate-like poems; flashing with the rainshine and hard and brittle underneath. Like Rob Hindle’s five epic “Itineraries” passing “garden backs going feral”; each one of his five feels like a walk without having to describe one; topped by a poem, profoundly gothic in its passionate brutality, about a Sheffield gang; its members’ names entering the PC’s notebook at the spot where

“[T]he road slows into the Wicker arch, its bus-lit shadows.
Here is transience and lycanthropy, somewhere to get lost.”
These poems know their patch.

The Footing, edited by Brian Lewis, is a collection of gems sealed in guts. When Andrew Hirst writes that “I’m a city poet, I adore rain on asphalt, the abandoned Moses basket in the bushes” he wholly gets away with the cheek of it. Because when he writes of the “house I lived in, believed from” you believe him. His poems, like the lido, “smell of the empty sea”.

The best of this collection does not trip, but has the thick amble of knowing where they’re going without refusing to be surprised. They speak of ache and familiarity of what Lewis calls a “long-term engagement with the ideas and practices of walking”; putting one word in front of the other. Like he says: “[F]amiliar ways are made unfamiliar by acts of attention to hitherto unseen details. Landscapes are disturbed and reordered by the currents of memory and history. Path and place are shadowed by loss, and become contingent and uncertain.”

No loss is greater than the narrative of iconoclasm pursued by Chris Jones in his startling sequence of poems ‘Death and the Gallant’ where he trails a couple of disparate Protestant scratchers and wreckers as they whitewash over hallucinatory imagery “and just for good measure, cuts Mary’s face” until, eventually, one is cutting at the other’s face. As the assailant puts it: “we’re pilgrims too”.

Any poem sits still on a page, but these lines wander the moment you let your eye run along them. They teach you, as Angela Ayers has it,

“this knack of standing still while headwaters,
washing past, whittle rocks to quartz”.

This footing is as good a basis on which to proceed as anything written about walking. Secure.