The Beach Beneath The Street 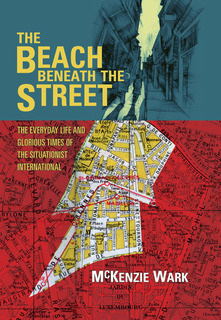 The Beach Beneath The Street
McKenzie Wark
Verso Books

This is a book that does something with the legacy of the situationists and International Lettristes, best known today (at least in the UK) for the ‘invention’ of psychogeography. It offers over that legacy as something to be used, something that isn’t only there for the purposes of contempt or high theory. Indeed it exemplifies a practical low theory: it is gossipy, full of stories and, most importantly, it explains why a handful of European revolutionaries, slackers and artists, active from the 1950s to 1970s, arrived at certain strategies and tactics that can still be stripped down, cleaned and reloaded.

So, what’s so good about Wark’s book? Well, the idea of low theory, the focus on situations, clear and accessible explanations of (still useable) ideas of Isidore Isou (amplification, decomposition, creation) and Asgar Jorn (art as part of the economic infrastructure, popular art against good taste), yarns about Schwambrania and the Donogoo Tonka company, plans for cities that shift to the West leaving their ruins in the East, his contrasting of the sacred city for the dethroning of God (Bataille) and the playful city of disparate adventures (Ivain), the multiplicitous constructing and publishing of Jacqueline de Jong, a description of a détournment that doesn’t just jumble symbols and signs but disconnects them from their owners, the importance of gifts and donations, the ambiguities (and residual worth) of the romantic, the alliance of clowns and serious people, and Trocchi’s box office…

… and no confusion here with flâneurie – this book is the perfect riposte to those, like Merlin Coverley and Rebecca Solnit, who have sneered at the political dérive in the name of woolly or literary wandering.

If there are any gripes to be had – about Wark’s division of everyday/tactics, history/strategy that mirrors a similar split in de Certeau’s theory of everyday life (trenchantly dismantled by Doreen Massey in ‘For Space’), or his not picking up on the contradiction between Constant’s planning of a layered city and the spontaneity of the dérive dependent on interweaving – then they are very few and far between and hugely outweighed by the wealth of vibrant ideas that he describes, sites and polishes for action. Wark, who has plenty to say that is critical of situationists, has done them a great service, but more importantly has given new life to their tactics and strategy