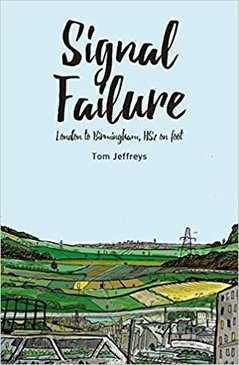 This is an odd book; or, rather, it is a number of different books of varying oddness and virtuous ordinariness in a single volume. Signal Failure should be about a single ambulation, but even that is split in two by a bad knee. Inspired by a ritual Special Brew offering on a ‘drift’ led by Laura Oldfield Ford, it begins by proposing itself as psychogeographical – and there is just about enough research here to have made that credible – but that’s not really what Signal Failure is about. It follows a ‘Down Your Way’ (old radio programme) format of organised visits similar to that of Two Degrees West; but rather than the meridian of Nicholas Crane’s book, author Tom Jeffreys’s journey hugs the route of the proposed HS2, a controversial high speed rail link between Birmingham and London.

Along the way, Jeffreys canvases opinions from those he meets, both by appointment and by chance; not only about the rail link but also the multiple issues it draws to itself. While his accounts of these encounters are engaging and sometimes illuminating, there is something too polite about these anticipated dialogues. The fumbling of inarticulate chance chats and the occasional exhausted withdrawal from the quest, however, are somehow more vital than those times when Jeffreys sticks responsibly to his task. When things go wrong, when the diary is disrupted, when the dialogues are hushed, then the spaces get a chance to speak in the Pinteresque pauses. There is plenty, then, that is sinister, charming and inflected by power.  This is somewhat ironical, given that “the people who are alive” who, he feels, psychogeographical literature “sometimes overlooks”(echoed by the Camden councillor who “suggests than an area can have desires independent of its population”) is exactly who Jeffreys is seeking to add to the literature.

What, however, is most striking about his book – and certainly far more endearing than Crane’s narrative or persona – is what it tells of the vulnerability to the terrain of Jeffreys as a walker. Not simply that bad knee, but his capacity to become lost and desperate, or to draw down on himself unnerving encounters with horses – unreal in a night time suburb, utterly terrifying when Jeffreys finds himself trapped in the middle of a field by a kicking horse. I finished that part of the book in a cold sweat. Jeffreys is amazed by how the road affects his mood. Deflated, like the football beside a goalpost on top of an unimpressive ‘motte’ (“this is the great relic of South Bucks pre-history”): such moments are the pure gold of wandering, the magic bathos, yet all the more endearing, here, for being wholly missed.

From author Ken Worpole, Jeffreys gets the idea of a ‘principle of immersion’, but, at times hilariously and then movingly, it feels as if Jeffreys is being digested by the road and its peristaltic cul-de-sacs.   He has barely walked a few hundred yards before “it occurs to me that I don’t know how to get out of here. The walls are high and all the gates seem locked”; once out of the city he becomes trapped in pheasant territory: “each path is simply a spoke outwards from the central feeding station. Time and again I arrive back in the middle.... I’ve been walking for two and a half days and I’m two minutes away from the pub I drink in every Sunday”.  Like Simon Armitage, who, in Walking Home, was rescued by his Mum and Dad from the Pennine Way, Jeffreys bails out to his parents’ house on his second night: “I just want to be at home”.

Yes, there are many objective insights here into the revenant of cynical and undemocratic planning, about the way that the languages of rural and urban management overlap, and so on, but what startles most in Signal Failure is the nerviness of a reluctant and inexperienced psychogeographer, recording his dependence on others, his retreating “almost every day... in some way from the task” and though he confesses that his knee injury “is the first time I have really thought about my body throughout the course of this walk” the way that the vulnerability and sensitivity of that body is exposed unmercifully throughout by the ‘grounds’ of the walk. If an aspiring psychogeographer can feel so uprooted just a few kilometres from his own front door...