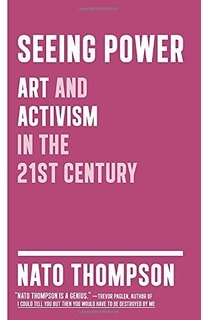 Seeing Power: art and activism in the 21st century

In Seeing Power the radical curator Nato Thompson describes the forces at play in, and the lie of the land for, those fields of art and activism in which he intervenes. Drawing on familiar narratives – Debord’s critique of the society of the Spectacle, Adorno’ s elitist high modernist assault on popular culture, de Certeau’s privileging of tactics over strategy – Thompson carefully articulates the problematic conditions for both activism and political art in a hypermodernist, accelerated image and information-based machine of becoming capital.

He describes in accessible terms, and with understanding and empathy, the ways that both individual artists and emerging alternative spaces are drawn into markets for social and cultural capital; and the equally poisonous trading in ‘exposures’ of these same self-evident betrayals.

Given the relentless stream of examples of co-option, collaboration, appropriation and neutralisation, and the rigour of the theoretical critique of the relations that generate and regenerate them (critiques that never quite offer solutions or responses of the same lucidity), the test for Seeing Power is how far Thompson’s proposals for subversive interventions and the production of alternative discourses and fields can match these daunting challenges.

There are contradictions in his proposals; tactics that operate in a vague “outside” of the Spectacle, the promise of a production of “new forms of subjectivities” without reference to performativity, the suggestion that starting one’s own small infrastructure is the same as occupying and subverting someone else’s, overly optimistic “points of escape” opened by ambiguous gestures (having already explained their culture-capital problematic) and an obsessive return to the question of ‘what is art?’

Despite these hiccups in praxis, however, Thompson has pertinent and wonderful examples to share: the’ International Airport Montello’ that ‘re-opened’ a dying community to view,  William Pope L.’s ‘The Black Factory’ that explored “blackness” through the burning, melting and chiselling of ‘black’ objects (family photos, Michael Jackson LPs, dominos) donated by members of the public and the staging of Waiting For Godot in the flood-ruined streets of New Orleans (enabled through massive community involvement). Building upon these concrete examples, Thompson proposes a spatial turn for both activism and political art. This is where Seeing Power is transformed from an impressive but occasionally uneven thesis to essential reading for psychogeographically inclined activists and radically-inclined psychogeographers.

Building on concrete examples – as diverse as the Arab Spring, the Occupy movement, Trevor Paglen’s documentation of the geography of the Bush Administration’s “dark side”  and the quirky subversion of the Troy Chamber of Commerce’s ‘Victorian Stroll’ by activists dressed as nineteenth-century workers demonstrating for nineteenth-century demands (40 hour week, and so on) that the Chamber of Commerce do not meet today – Thompson makes a convincing argument for ‘space’ (physical, geographical) as the most favourable ground and content for aesthetic interventions that can contest power. Breaking the ambiguous/didactic binary that is established perhaps a little too inflexibly earlier on in Seeing Power, what comes through strongly is the role of a radical absurdism in successful grassroots interventions; radical clarity and political specificity through the eroded landscape of a Beckett play, class war in fancy dress, effective reformist lobbying through an imaginary airport. In a cultural economy in which “we often do not feel the effects of the culture industry because we are also its sacred product” the turn to space “provides a way to think about power concretely.... You can walk downtown and see the battle taking place. There are people involved you can name. Walls can be torn down. Buildings can be occupied.”