Scenes from the Revolution 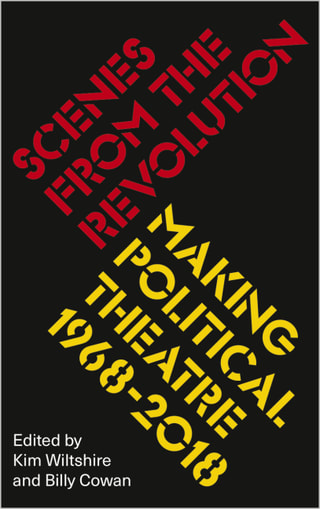 I read a lot on trains. But this is the only book that people have asked to photo so they can get their own copies. If it addresses an appetite out there, does it meet it?

In parts. The most exciting of which is the section on Queer Theatre. In other sections (socialist, theatre-in-education, even that on women’s theatre) what is described is often a defensive and neo-liberal-driven enforced narrowing of work towards a more functional and sectional social-usefulness. The Queer Theatre section however describes practices that keep reaching out, keep skipping across specialisms and formal distinctions. In most sections of the book, however, this is a chilling account of how plays and programmes challenging reactionary histories or demanding action to uproot injustice and inequality fell away and were replaced by work that sought to improve sexual health or empower women prisoners. The latter was never in any necessary contradiction with the former; the problem was that the former was almost entirely obliterated. Consciously obliterated.

I was around to see some of how that worked. In the very early 1980s I wrote the script for a play (with an anti-nuclear weapons theme) for M6 Theatre Company which led the local Liberal Party-led council to axe their part in the company’s funding. It was a direct political attack, it was politically resisted and that theatre company survived and is still around today (focused now on performing to young people’s audiences). But the Right got cannier, so when a few years later I finally got to work with Pit Prop Theatre (something of a long-cherished dream) our play about the Golem was halted in rehearsal when the company’s board rejected a Coopers Lybrand business plan foisted on them by the Arts Council, forfeited their funding, and the company closed. If you “google “Pit Prop Theatre” today, you get directed to archives. In ‘Scenes From The Revolution’ the debris of neo-liberalism’s rise and dominance from the 1970s to the 2008 crash is everywhere; indeed ‘Scenes From The Reaction’ might be a more accurate title for much of the book.

But things are changing. Neo-liberalism is weaker and many of its proponents have shifted towards authoritarianism. Rebecca Hillman’s excellent essay on the reappearance of “socialist praxis”, citing the impact and high quality practice of rising new companies like Common Wealth Theatre, spreads its reach beyond plays-on-stages (those as well) to ‘red bloc’ marching, innovation on picket lines and ‘red bases’ that bring together social clubs with food banks and community theatres. Missing from the index here is any entry for “Clarion”, but there may be more similarity between what is beginning to develop now and the left wing cultural and social clubs of the 1920s and 1930s (the Clarion and others) in Britain, than with the more commonly cited antecedents like the Blue Blouses of Bolshevik Russia or the dialectical theatre of Brecht.

Which raises questions around the politics of political theatre that are sometimes sidestepped in the book. The main concern about ‘agitprop’ expressed (by academics and practitioners) in the book is an aesthetic one; that it does not make for good theatre. A fear that people will be put off by its ardour and sincerity and advocacy. Done well (anything done poorly is off-putting), the opposite is the case: Monstrous Regiment’s ‘Scum’, the hilarious ‘Western’ satire on 1980s Toryism by Manchester Community Arts Workshop (whose work has no online trace at all) or the popular surrealism of North West Spanner were all thrilling and inspiring and popular agitprop practices, not so much transcending the agitational form as fore-fronting its own issues of uncertainty in certainty, the place of difference in the act of resistance, and the revolution in the revolution.
Among the small political theatre companies in the 70s and 80s there was always a tension and a debate around democracy and resistance (within others about reform and revolution, vanguard parties and popular organisation) which is barely touched on here. What does come through, however, is that where companies addressed the politics of their form while retaining the radicalism of their content they were better able to sustain themselves and their appetite for change. Where radical forms were repurposed to promote government health warnings and other establishment social priorities, the politics declined or disappeared; ‘in order to save the village it was necessary to destroy it’.

Where practitioners are given entire essays here to explain their work, a fine detail of practicality and challenge opens; particularly in Jingan Young’s account of setting up Pokfulam Road Productions to “provide a platform for the severely under-represented group of British East Asian Artists on UK stages”. Rather than manifestos, these essays offer insights into the intuitive and emotional costs and rewards and ambience of such work, with Sudha Bhuchar writing on the “melancholy of migration” and May Sumbwanyambe about “exploring the impact on human consciousness of feeling torn between two (or more) very different places”. Similarly, Chris Goode’s engaging essay describes the push-and-pull of creatively navigating his “dinosaur” radicalism when “so many of the generation of queermakers now emerging are able to reconcile an admirably nimble analysis of intersectional politics with a willingness to occupy commodity formats”. But there is also, understandably, much self-justification by practitioners defending their organisations’ past efforts and present policies; a better balance of critical essays to reminiscence was perhaps thwarted by a lack of theatre scholars addressing this kind of work and its history?
The context for any individual’s or company’s defensiveness is evident from the book’s descriptive sections; whatever other divisive social forces are, or were, at play the precise and targeted withdrawal of public funding from radical, critical and left theatre (as part of a general maceration of public services) has driven many emerging radical theatre-makers to become entrepreneurs relying on sectional audiences in a neo-liberal-enforced marketplace. A left Labour government might yet change all that; a massive reinvestment in publicly funded arts (begun by the radical 1945 Labour government) might massively expand radical theatre and extend and magnify the kinds of cross-boundary reflexive working described here by Billy Cowan.

This is a pioneering book, addressing a largely ignored tradition and an ongoing theatre practice; it is the beginning of a discussion (many discussions), rather than a wrapping up of accounts. The sectional feel of the book and its structure, the absence of any complex drawing together of the various strands, suggests that this book is just the beginning of a critical discourse that (to follow perhaps the best quality of the book) will be a joint endeavour of practitioners, interpreters and critical strategists.
​