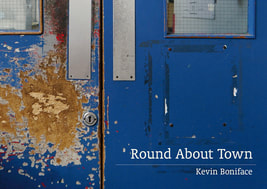 Round About Town
Kevin Boniface
Uniformbooks

​This is a remarkable book for the breadth of its scope and the depth of its emotional affect. All within the scale of the everyday, Round About Town is Shakespearean in the range of its narratives – from the tragic to the pitiful – and in the multiplicity of its voices – from the braindead poetic to the skin-of-the-teeth genius. Every page is quotable. Consisting of the reflections, encounters, witnessings and eavesdroppings of Kevin Boniface on his postal delivery rounds in and around Huddersfield (UK) over seven years (2010 to 2017), the incremental effect of these shortest of short stories overwhelms the reader with sadness, elation, laugh out loud hilarity, righteous fury and joyous immersion in the absurdity of small things.

Police sieges, squeaky fan belts, tiny poisonous transactions, empty tins of Tennent’s Super on the run, “suggestive trees”, car park attendants wearing stab vests, decapitating frosts, elderly women shopping in Superman pyjamas and the old woman who “don’t even believe in Richard Branson!”, piles of vomit and candles for “the victim of the ‘mass brawl’”; Boniface often allows the tales to tell themselves. But sometimes it is his observation that restores the ordinary to its magical norm, as when he finds a pair of discarded trainers: “a foot apart, and slightly splayed at the toes, as if somebody caught up in the rapture hadn’t fastened their laces properly”.  At other times he crafts perfectly formed narrative gems from street altercations:
“On the new estate, three boys are playing football in the road. A girl asks if she can join in, ‘Yes’, says the boy in the Chelsea kit, ‘You can pretend you’re watching us on TV’.”

Through the low level mayhem and bitter sweet comedy, Boniface manoeuvres his way through the dog owners with overoptimistic impressions of their wards’ temperaments, a boy selling pebbles for a pound, copulating insects and a “village populated by the grown-up cast of a Children’s Film Foundation movie”; the jackdaws squabble and “a Radiophonic Workshop soundtrack” plays in his head. Round About Town is a work that can conjure fury at poverty, contempt for the poverty of mainstream popular culture and joy at its moments of poetic collapse. Poundland should be forced to sell this book – if Michele Bernstein, Asgar Jorn, Jacqueline de Jong and Guy Debord had kept diaries of their drifts none would have been better than this.