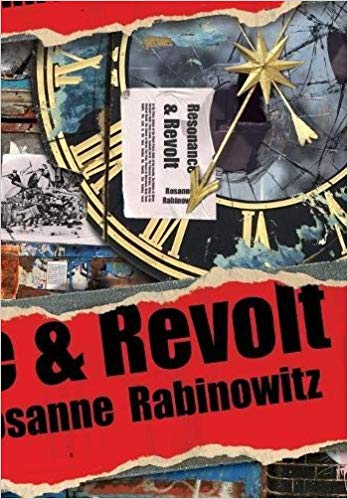 
There is nothing predictable in Rosanne Rabinowitz’s short story collection Resonance & Revolt. Coming to these stories from a (very enthusiastic and affected) reading of Rabinowitz’s novel Helen’s Story – her take on Arthur Machen’s The Great God Pan, in which there is a far more recognisable, if repurposed, uncanny – here the radical instability of real and numinous bleeds out from the narratives into the fabrics of their imagined worlds. The crucial ‘difference’ in Resonance & Revolt is the energy of its political-historical agencies. There is no certainty about when human activisms drop down to an other-historical sublime and when that ‘something else’ takes form in the manifestos lived here, the banners unfurled or the stones arcing towards the police lines. It shifts like a shapeless traveller through all the layers and in different directions at once.

Oddly, to get that mutability under the skin of the reader, Rabinowitz’s writing is very precisely detailed, drawing realist worlds and then infiltrating them; there are only a few monsters here, but mostly everything is monstrous.

The most effective of Rabinowitz’s stories are those in which the realist details are radically possessed by shifting energy: tiny patches of skin that become a double in ‘Pieces of Ourselves’, a naff landscape painting that won’t stay fixed in ‘Keep Them Rollin’, a scruffy cap that passes for a mask in ‘The Peak’, an old bloodsucker in ‘Survivor’s Guilt’ and the spirit of ‘The Pleasure Garden’.

The problematic of naturalism is not always successfully navigated, when the “continuing horror of team-building exercises” doesn’t quite match the “blizzard of snowflakes” of a peeling body or time travelling in “the Darks”, but outstanding here are the interweaving of the three time strands of ‘In The Pines’, ‘The Colour of Water’ in which what haunts is not other, but recognition, seeing for “the first time.... someone who looked anything like herself” and ‘The Matter of Meroz’ which brilliantly mixes Talmudic study with alien contact in a fight against pogromists.
​
And then Rabinowitz wonderfully returns to the approximate territory of Helen’s Story in ‘The Lady in the Yard’ with its female Pan – Panisca – and its gentle unfolding of expectation until, in a derelict outdoor swimming pool, three-toed Suzy takes a dip with nymphs  and finds the encounter both transforming and painfully re-marginalising, as a magical restoration and the limits of 1960s’ US culture entwine, just like real magics with real everydays.