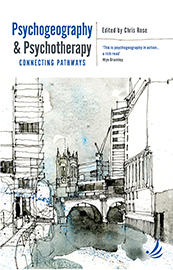 There is a creative contradiction in psychogeography. On the one hand its key tool is the dérive which is all about throwing off functional objectives and destinations (compared here by Chris Powell with Freud’s concept of free association “allow[ing] access to unconscious processes within individuals”). On the other hand, psychogeography attempts to compile the human and geographical information necessary to build new ‘situations’, zones for an ‘art of living’ at odds with the dominant capitalist mode of social relations. So, a relationship with any therapy (with, presumably, some therapeutic change or outcome in mind) is likely to generate some complex frictions. At a banal level, psychotherapy is a recognised profession. Few psychogeographers make anything like a living from their practice: a very few turn their dérives into literary texts and sell them. Such a union of unlikes as proposed here is always likely to be uneasy; all the more reason to pursue it.

In the collection of essays that make up Psychogeography & Psychotherapy such tensions shift back and forward in different ways; sometimes the different parts neutralise each other. At other times, their differences suggest future hybrid practices and creative mutations. I will try to emphasise the positive, but it is worth noting that while psychogeography takes quite a critical hammering in some of the essays (and quite rightly, gender mostly is made problematical, but other exclusions are hinted at in as yet undeveloped critiques) there is little comparable critique of psychotherapy. It has to be noted, also, that there is some conflation of psychogeography with flânerie by some contributors who seem familiar with a few texts rather than with the living ‘memory’ of the practice (as Blake Morris might put it). Morag Rose’s essay serves as a generous corrective to this; putting fine detail on the general conviviality that seems common to the practices of the psychogeographers and psychotherapists alike.

Where this collection is most interesting is where it challenges the psychological (in both psychogeography and psychogeography) as a sealed and inner province. Diane Parker contests this separation, in the context of a women’s movement therapy group, describing a shift from individual ‘bubbles’ to a collective ‘grounding’ with and on the floor of a community mental health centre. Parker quotes ‘psychologist and mythologist’ Sharon Blackie to describe this transition: “We spend our lives searching for meaning in ourselves, engaged in deep conversations with our ‘inner child’.... when so much of the meaning we need is beneath our feet”.

While there are complex and difficult issues expressed here, particularly around ‘belonging’, ‘rooting’ and ‘home’, all of which are sources of trauma as well as solace and safety, there is a general drift in the book towards what Chris Rose calls “therapeutic landscapes” that are “not necessarily located in attractive rural places”. In Jane Samuels’s essay this landscape is social as much as topographical, it is “a complex space: a living, layered confluence of history, present and future... at once personal and social”. Samuels advocates an art of “active walking”, drawing on the active listening of Carl Rogers; one that “looks for, and responds to, the total meaning” of its spaces, addressing both “the content of the message and the feelings that go with it”, noting “the smallest of cues”. Elsewhere among the essays, attention is given to granularity and touch. For Samuels “self-actualisation” goes “beyond purely human interactions and into the fabric of our cities”; and she describes how, in the wake of the Manchester Arena bombing, people in that city activated themselves socially to take back “the city from the terrorists and the armed police”, how “people reached out their hands to strangers and held them... We held the space”.

This space, whether urban or rural (and there is some unquestioning saluting of the bucolic here), sometimes appears in the book in an inert form: “[W]e had picked the shooting moors for the first walk because of the relatively blank canvas they present, akin to the presence of the psychoanalyst as a ‘blank screen’”. In Phil Wood’s essay, however, the terrain, in the form of cities, steps forward as “subject to varying forms and degrees of detriment and hurt”. Wood describes “[T]herapy for the city”. He outlines a mismatch of social work departments concerned only with one-to-one casework and planning departments that see the world “in terms of units.... deeply suspicious of anything that might arouse individual or collective agency”.

Wood’s essay conceptualises the terrain as an agent: “a complex, adaptive, thinking, feeling entity – like ourselves”. However, given the problematical relation of healing to normalisation, of re-grounding to a return to the sites of trauma, there is something unsettled here; the introduction of officials and activists to the textures of wounded cities opens up therapeutic space that requires more detailed critical examination than there is space for in a collection of short essays. Is there some way that Wood’s understanding of the city’s agency can be joined to the “outward facing” activism of “loving kindness meditation” cited by Benedict Hoff and Richard Phillips? Inner and outer combined? That seems to be the ambition of all the essays here; yet the space of a short essay is too limited to address more than a few of the necessary complexities.

In the troubling dynamic that sounds through a number of the contributions there is an echo of the early therapeutic work of R. D. Laing. Laing worked with twelve institutionalised schizophrenic patients; a talking therapy was apparently fully restorative and they were returned to their families. However, the unchanged spaces and circumstances of trauma to which they returned reignited the patients’ dislocation and Laing recorded that they were all returned to institutions within a year. When separating (to varying degrees) the ‘inner’ life of the person from the landscape of trauma (or any other landscape), the machinations of therapy are liable to opening a ‘non-space’ of dislocation and separation; an apparently ‘blank canvas’ that is more inscribed than those focused on inner life might be prepared to take into account, more of a “hall of mirrors” than touchable grounds.

To the essayists’ enthusiasm for what psychotherapy and psychogeography can gain from each other, a certain wariness may be necessary. The aims of the two modes are not the same. Psychogeography seeks to create disruption more than resolution, provoke the deterritorialisation of the self more than its actualisation. In its turn psychotherapy’s healing might be seen as prioritising the person over psychogeography’s political ambitions; ameliorating the effects of capitalist relations (or even working to them, referencing ‘Mental Capital’) in contrast to psychogeography’s preference for ambling through capitalism’s filth in the attempt to undo it at its most basic level.

Psychogeography & Psychotherapy is hopefully just the start of a dialogue of action. We are in the middle of sustained wars upon subjectivity and agency. If psychogeography and psychotherapy can avoid neutralising each other and benignly plunder the best that each has to defend, then something may come of this; preferably some suitably twisted and odd hybrids that will horrify the ‘establishments’ of both modes. But the issues are complex and urgent; I hope that someone with a detailed grasp of both, and little investment in either, is at work on the kind of detailed monograph that can give us some further pointed guidance. In her essay Liz Bondi worries about psychogeography’s walking against the grain as a “demand for intentionality... [that] unwittingly sets boundaries around psychogeography that can be used to police it, enrolling it into a disciplinary frame”. This observation is both irritating and crucial. Simply leaving things to chance and the authenticity of the everyday is a likely obeisance to the dominant social relations, but at the same time Bondi is right. Psychogeography has its own frames – frames which, like the turtles, go all the way down – so, how do we do the difficult thing and unpick ourselves and our own practices as we attempt to unpick the grain of the social strata?

Watch this space? Let’s hope a space to watch will prevail.