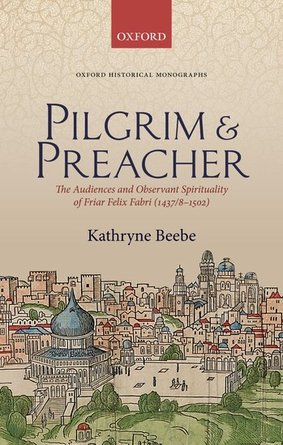 Through the lens of Kathryne Beebe’s researches, the pilgrim-writing of fifteenth-century Dominican Felix Fabri takes on a postmodern significance. The multiplicity of his telling of the same tale and the entanglement of practical guidebooks with virtual geo-liturgies turn the fine-detailed study of Pilgrim and Preacher into, in parts, something with far wider connections.

Beebe describes a tense and contradictory dual movement within the reformist parts of the Dominican order and played out in its female religious houses: the reformers’ impulse towards enclosure including the boarding up of convents with metal blinds, at the same time as the women within were expressing the desire to go on pilgrimage. In response to this, Fabri drew on his more practical and secular-inflected but devotionally-intense pilgrimage-narratives of his own ‘Holy Land’ visits – his Pilgerbüchlein and Evagatorium – which combined “salvation and entertainment” (conventional pietas with controversial curiositas) to create for the sisters a Sionpilger, a guide to a virtual, imagined journey to Jerusalem and to the shrine of St Katherine at Sinai to be conducted within cells and chapels. These guides were distributed to the sisters directly under his guidance and to others in the wider order.

There is something proto-mythogeographical about the multiplicity of journeys and texts and the way they are laid one over another, the autobiographical disruptions and privileges, the vaporising and symbolising of things and the bathing of familiar places with the enchantment of an elsewhere. However, in this postmodernist enthusiasm, the ‘Holy Land’ as a place of real terrain and real people is erased, appropriated to Ulm and its religious houses.

Beebe describes a performance practice; not a simple reading or an ‘armchair pilgrimage’, but a re-working of the materials of pilgrimage in real, close and enclosed spaces into something abstracted and unfamiliar. A critical reading of the evaporation of Fabri’s text into meta-text unveils just how much of a simulacrum Jerusalem and the ‘Holy Land’ – even when physically visited – always was, and is, in Christian narratives. Through virtual pilgrimage the rough and productive encounters with non-Christians that appear in Fabri’s autobiographical and practical accounts disappear; what emerges instead is an ideological space that condenses in “Jerome’s concept of pilgrimage.... as a way of interacting primarily with Scripture”.

It is testimony to the erudition and vividness of Beebe’s account here that the ironies and invasions of these pilgrim-texts, as much as their modern affordances, remain as things that are vital considerations for any serious, radical walker and contemporary détourner of pilgrimage.