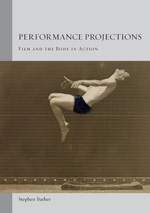 This is an engrossing, immersing, complex and packed book about the collision and entanglement of art forms, across performance and film, and about the passage of bodies through and as parts of those entanglements. It brings us to a series of geographical and metaphorical chambers, tunnels, squares, screens, motherboards, courtyards, chapels and walkways “where future histories of the human body will be generated and witnessed”. At once Stephen Barber describes the “renewal and obliteration” of film, the revival and transformation of practices and the rotting and burning up of materials, the digitisation of images and the refusal of the materiality of the body to be still without stillness being its own movement. Yet there is no fetish for “the body” here, an organism as much under threat of its own transfiguration as any in the spectacle of smooth spaces.

The spaces that Barber stakes out are often “pitched between darkness and invisibility”, residues and fanciful maps for future performances on the very edge of seeing, their elusiveness tripped up on the irascible textures of those places that pre-date the performances in them and that endure when they are over. On the one hand Barber is always aware of film makers and performance artists as “documenters of their own work” in materials less substantial than themselves, while nailing how the most substantial of their things – such as the semi-public courtyards of German cinema from Kuhle Wampe to Stroszek – can suddenly be eaten up by something as banal as development.

It is partly the breadth of Barber’s reach that makes this book so engaging – from film’s earliest traces, through Robert Smithson racing in his shirt sleeves around Spiral Jetty and the contemplative bodies in landscapes of escape for Yang Fudong’s Seven Intellectuals in Bamboo Forest, to the cavorting of Pussy Riot – but it is also its shifting and improvised grasp on bodies in the spaces of occupation and uprising and their precarity under processes of “corporate annexation, corporeal prohibition and surveillance”. This is a book about standing still in Taksim Square and the pixilation of the spectacle; no accident then that it turns to Ana Mendieta for a performance art “preoccupied.... with processes of corporeal and ecological disintegration”.

Part of Barber’s achievement in Performance Projections is that he re-integrates as he dis-integrates his narrative, providing us with perverse instances and resistances of flesh, projection, performance, gesture, texture, mobilisation and immobilisation, just as he is swinging his focus to the shifts and stabs and slides of performance and film across and through elusive and oppressive surfaces and vitrines drawn to and approaching “a new extinctual ecology of space” and the “vanishing of the bodies”. Barber is writing just as much about disappearances in Mexico as aesthetics; and and and. And the “ands” continue to connect even as a stressed grammar disappears from beneath their feet.