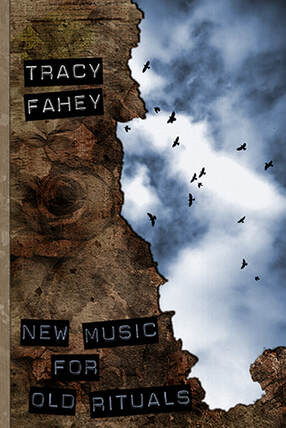 
Most horror writers can overcome the technical challenge of creating a realistic and engaging scene-setting. Far fewer can do what Tracy Fahey does again and again in this collection: deliver a horror that is realistic, engaging, ambient, explicit, and emotionally and socially vital. When the flesh is rotting off the bone and falling into the field, that’s when Tracey Fahey brings you vividly up against social realities and the darker part of human foibles. Even when all you get is a “squiggle of shadow” it comes real enough, “like a flaw in an old VHS tape”.

This is ‘folk horror’ with real folklore stitched into each tale (and an end note to each to lay out the real ground from which it springs). Fahey’s is not a morbid horror, it is cultural horror; it’s about death and cruelty and recession and bigotry and accidents in recognizable communities and how “contemporary anxieties… trigger older, darker memories and rituals”. The weirdness is in both the monsters and the tales people believe about them. Then people dress as crows and fight, ancient bodies are re-buried, the eyes in a book open… or the ambience  of a tree-lined road manifests from a memory or a dream running out of time.

In New Music For Old Rituals you need to watch out for the Aunts just as much as the fairies. A ghost housing estate, haunted by the death of the Celtic Tiger, is as likely to get you as the tiny hands reaching up through the soil of the fairy fort. Fahey’s horrors cross or ignore all sorts of boundaries. When you are scared in these stories, it is for a reason. Rooted in communities in Ireland, mostly rural, the locations are places where “the past is always present” and no one would think to ask themselves why they are skirting the fairy fort or looking after the whitethorns. There is no soft romanticism or easy anti-mainstream posturing; the customs and practices weave in and out of Christianity and ‘something else’, pagans as susceptible to fear of difference and transgression as much as Catholics. The music may be new, but the rituals are on the edge of the old dilemmas.

But I am doing the stories a disservice if I suggest that what’s most interesting about them is their contextualization. It’s not.
Far more powerful is their visceral impact. I got goosebumps as the travelling salesman in ‘The Crow War’ packs away his unsold wares and heads off to the ceremony that the other visitors have never heard about.

But the ceremonies, for all their fleshy roughness, are fading into ghostliness, dying out like victims struck by plague or famine; a time is coming to an end, a death as stark as Plutarch’s story: “Thamus from the stern, looking toward the land, said the words as he had heard them: ‘Great Pan is dead.’ Even before he had finished there was a great cry of lamentation, not of one person, but of many”.