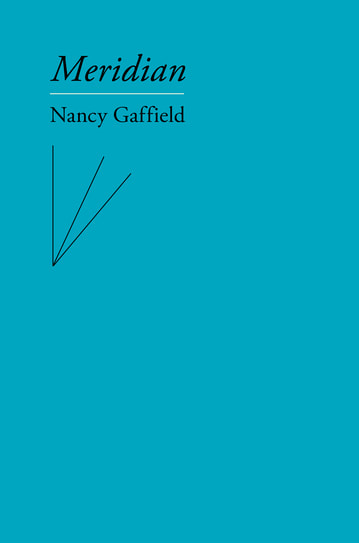 Nancy Gaffield’s long poem of her walk following the Greenwich Meridian Trail from Peacehaven in East Sussex (UK) to Sand le Mere in Yorkshire is two things to me. First, it is a walkable read; it allows a ‘one step after another’ progress through its texts, a phrase a pace, as around the words the poem’s landscapes unfold in comfortable waves. Second, it is a serious question-raiser. Because it is as good as it is, it drops little metal filings and thorny splinters into a reader-walker’s skin, injuries that irritate and will not allow the ambulant thinker rest until they have been withdrawn or absorbed.

So, the walkable read, then: this, from a woman who is “walking along at crab pace / sometimes sideways” (familiar ideas there), but not without baggage or burden: “her pockets brimming / with the eyes of the dead”. History and global anxieties are this walk’s fences and road signs, but within the constrictions of a crinkly trail (the poet is following an institutional route, not ‘drifting’), there are repeated sinkings-in, reflective passages that mirror the path’s own edgelands:  “In the woods where the words live
I huddle down between square brackets
the making of a woman is not silence
or violence
but her freedom to roam
in woods/words”

The journey north, passing through layers of dialect and faults in the geology, its seams disappearing and reappearing, swings around the chamber at Royston. Like a night sky, its “dome complicated and numinous, the ceiling a beehive”, in which worms and larvae continue to excavate, a place whose only historical record is itself. A to-the-side generator. By tapping into its quantum vacuum, Nancy Gaffield messes with time and the order of events, so “the darts players in the Anchor / stand mute / dark silhouettes of the people they were / a moment ago”, concertinaing the mettle of the road so that it tires, perishes and reveals not some new or metamorphic materiality, but that “inside every crack in the earth / is a word waiting / to get out”.

In these few lines, the materiality of the poem seems to tremble. The poem concedes too much, conveniently perhaps for a poet, to the old idea of the terrain as a readable text. And here begins the questions on which the ambulant reader repeatedly trips as they journey along ‘Meridian’.  Niggles that creep to the meaning of poetry and poets and what they do. For there is a strain in Meridian – and in much art, including sophisticated modernist work – that seems to want to trade the rich materials of the way and the site and the ecology for the ecstasy of lifting off – rhythmically and philosophically – to an ideal state. Here, this “starts with listening / beyond the mechanics”, all to the good, but then takes an arrow-like line to what is “beyond”, racing through the expected order of events, rising above the path until “[T]he sun drinks me till I am nothing but white light in an empty vessel”. The precious tension between the visceral presence of a pig stunned “by captive bolt pistol” and the spectral half-presence of “a phantom crew appearing from the fog” is burned up in an apotheosis and the detailed grittiness that sustained the poem in its rhythmical geography is lost for a while in the disappearance of the poet.

What had seemed to distinguish the poem (its sense of movement through the landscape) threatens to extinguish its torque upon that terrain, as its trajectory becomes airy and frictionless. Yet, no sooner does the poem seem to abnegate its own ground, than it undoes this on the very next page, replacing the lifeless void of transcendence with a material ‘emptiness’ that is physically there: “indentation / where animals / slept last night”. Then it repeats this switchback in miniature in the lines

“I am nothing
but a tiny speck of blue”;

and then, again, renews the threat to itself by sampling headlines of terrorist attacks in the UK and a far right rally and killing in Charlotteville, USA. There is something worrying with this sampling: it seems to be all of a part with the modernist fragmentation, random shards of national and global media poking themselves into the walk. Yet, these examples constitute a smooth prioritisation of surprising violence in non-war zones, at the expense of places where violence is expected and attritional; an editing of space that is not evident in the empirical texture of the poem, but sudden shows itself as Meridian seems to reach for ‘bigger’, global resonance. But just as Gaffield’s examples of “the language of the place” turn out (according to her own notes) to have come from a book by Robert Macfarlane and not from “the place”, so the fabric of the poem itself becomes woozy, and what had seemed so solid in its description of what was alongside the route turns spectacular, more quoted than articulated.

Because Meridian has been so carefully attentive to the detritus and signage and to the details of the flora and wildlife accompanying the poet’s quest, this wooziness is all the more challenging. It asks difficult questions of anyone who makes art from walking. How do you stop the airiness of representation, metaphor and mimesis from draining the thingness of the terrain from your art? How do you stick with the multiplicities of your own uneven body, its parts moving at different speeds and in different phases of development, with its clumsiness and inconsistency, rather than rise to a smooth transcendence of these difficulties? How do you ‘stay with the trouble’ (to steal Donna Haraway’s words) and how do you commit to your compromised involvement and indulgent pouring of self into the grounds?

Disconnecting, the poet, close to her destination, declares “and I think I don’t want / to live in this world / anymore”. Not that she does not want to live, but does not want to live in “this world”. How strange that an embodied artist should, by close engagement with a route, end by wishing for her own transcendence over and away from it; the unhinging from and of the terrain itself, from and of “the tuber’s purple globes” and “the Wolds / extending beyond flatness”.

Perhaps there is something in this crisis and climax that is seeded in the poet’s original choice to walk a designated trail, to deny herself the “sideways” she seemed to claim earlier on. So, the trail eventually becomes a runway for her: “[T]he further I walked the more passion the line excited in me”. The Meridian Trail turns into a line of desire and then a line of flight, from which Nancy Gaffield eventually, metaphorically, takes off and disappears, leaving behind her disappointment in the country. The Humber Bridge lifts her even further from the ground and she ends where the Greenwich Meridian enters the sea wanting “to be / shedding this human skin / to join the seals”; her admirable ‘becoming animal’ (though it seems more an airy wish for copying than a Deleuzoguattarian ‘attending to’ the seals) made questionable by her earlier Gnostic self-annihilation.

Meridian is a wonderful poem, a true reading-journey. It flashes its images at the pace of a striding rambler struggling with blisters, moments of tender pain giving space to the reader-companion to reflect and savour the jouissance of the touch of liquefying body on path. Only because it is so good, is its conclusion so deep-reaching, digging down (as it rises up) to questions and contradictions that, perhaps, walking artists find it easier to leave unasked of themselves or of others. But I felt, thanks to Meridian, that I should ask them here.