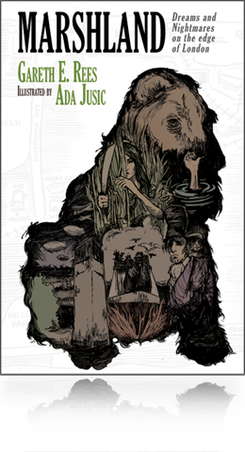 Marshland is a delirious tapestry of tales and adventures in the marshes of London; it mixes first hand accounts of wandering with suspicious histories and wild, closed and obsessive fictions. Its initial and abrupt shifts of perspective settle quickly into a spectral ecology that weaves together its trangressive bodies of concrete history and memory with a Polaroid immediacy and yet seemingly beyond the ken of any organisation. Until that is the whole slimy, shiny, bearskinned things is locked in disarming combat with deadly Olympic ‘Games’

Gareth E. Rees was first led into these voids of Hackney, Leyton and Walthamstow by his dog Hendrix; exploring the stinky wounds that open up when the rest of a city is squeezed by development. In these stretched spacetimes of marshland, Rees slips in, slips moorings, slips between selves and characters, lets slip the dogs of word, and then just slips some more until we read on to save ourselves from going under. Where the rest of the city is up for grabs, here something gentler and more unsettling stirs for a while, something that embraces and drowns, shifts silt and rehydrates old water treatment systems as public art until it is all in turn ruined by its installation. A tiny epic.

For there are many ruinations here; remnants of peace shredded by gunshots; erotic theatres where doppelgangers, doggelgangers and doppelbangers appear briefly and intensely; prehistoric working class inland proms memorialised in gestures and emotional habits. “Nothing is safe” when a crocodile-catfish-terrapin lurks in the depths of the collective imagination; ready to suck down any swan-subjectivity at the ripple of a memory. Engineers and jobsworths drift through anomalies, timing out romance and bumping into fake stone circles from the future. This is a place where flounders flounder and tumours eat away at the certainties of some next thing, love, companionship or narrative. Where, sometimes, the past weaves with the present to create a devouring tulpa in an old-new ‘luxury’ flat; its bedroom threading through the toy factory floor. A multi-place where strange obsessions gather on their own narrowboat republic, its deck stacked in favour of the man dressed in a circus bear skin, while a poem written on a door drifts gently by.

Rees practises a prose of juxtaposition and default paranoia, his subjectivity hard up against the terrain, generating a richness of obsessive detail, matched by a reparative interweaving of narratives; layers of obfusfaction, autobiography and make-believe that reads like real and real that no longer feels quite itself. At first I worried about the disparate strata, briefly I became a “composite” reader (“half-remembered [by myself] from public information films”) until I fell into a sustained euphoria as each strand glistened memorably into place in Rees’s great unfaltering unfiltering of things.

Marshland is a fabulous, extended exposition of an ordinary place, setting the outside on the inside like a crocodile-terrapin, building resistance by piling up the minutiae of encounters and observations into interior barricades; drawing from a wide range of psychogeographical and eccentric influences, which Rees generously acknowledges and references for his readers’ future use. There are few books that are unreservedly embraceable as coincidental with the trajectory of the mythogeographical, but this is one..