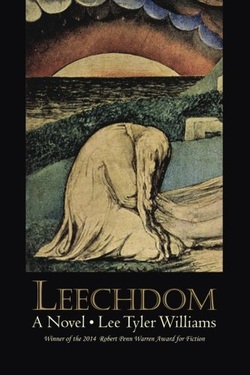 
This is an extraordinary novel. Every phrase rots and shines. This is a text to read as slowly as its mud accumulates around your understanding and creeps up to your mouth. This is about as visceral and geological as words can get. And yet – and here is the book’s outstanding wondrousness – it all transcends its own accumulation; in a rude but gentle spasm it emerges as a self-formed ‘world’ where apocalypse is within every stolen grain of rice and every thrown handful of seed. This is a Southern States’ cousin to Conrad’s Heart of Darkness; bodies metamorphosing in an upriver ‘camp’ where unquiet histories and troubled dogmas masquerade as ‘healing’.

Lee Tyler Williams’ first person narrator, Sister S., is heroic in her selfish, ascetic routines of care, her dutifulness founded in her unflattering comparison of herself with a divine agent that expresses itself to her in silence and dumbshows of suffering. She is scientific in her unshowy dissections of herself and her rounds among her wards; while the newly arrived doctor, on the other hand, is reclusive; jumbling lizards’ eyes with babies’ blood and mixing all with a crude, poetic, and possibly murderous modernity.

The sufferers – whether of leprosy, poverty, misfortune or racism is never made wholly clear – are snatched from distant domesticities, transported in a kind of malevolent ‘underground railroad’, reversing freedom’s flight. They are gathered under a regime that renders them helpless, bickering, ‘criminal’ and unforgiven. Even wine will not tempt them to communion. These conditions leave them few options but either to pull the temple down around their ears or to cavort in re-enactments of the place’s defeated and dispossessed tribe and of soldiers in ‘hunts’ of platoons of prostitutes orchestrated and remunerated by a Confederate general.

In this ‘camp’, which is everywhere and of no specific time, civil war and slavery and colonialism are supplicants in each prayer, players in all its carnivals of custom-made costumes of paper and shambling and braggart parades. All the while, by murder and birth, and the death of successive Mothers, becoming more chaotic and less vindictive, feet sink deeper into the mud and a marauding shadow ‘camp’ of cats creeps closer to the stores.

Within this curling nightmare the parts are greater than the sum. Despite their enigmas, dogmas, disappointments and wounds, the characters reach out to each other, wounds are dressed and tumorous mouths fed and thefts forgiven and covered up; all as the boat goes down and the muddy waters rise up.