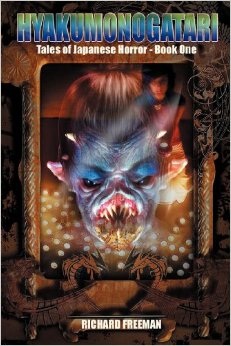 In the 1960s, the US TV Series ‘The Outer Limits’ guaranteed its viewers a monster every episode. In Richard Freeman’s collection of short stories the reader is similarly assured of an encounter with a yokai; members of a bewildering bestiary of unreal Japanese life forms. As this pattern of visitation quickly becomes clear to the reader; predictability strips the stories of crude suspense and, in its place, emerges a sharply pleasurable immersion in an uncanny universe of visceral zoological interweaving.

The stories of Hyakumonogatari are set in an unreal Japan. The details of popular culture, etiquette, nomenclature and folklore entertainingly embroider each setting, but across the book they shimmer like a mirage from which emerge, with the force of flesh and blood, beings that are only too physical; companions to the human only a thin wall or one wrong choice away. Some of these monsters are punishers - malevolent restaurant critics, tomb disturbers and cruel exploiters of animals among their victims – but the individual motivations of the yokai are far less important than their collective inclination to rip into us, soak through our ceilings and turn us into them.

The multiplicity of monsters is inspiring; no thin duality with pale vampires here. Freeman’s ‘Japan’ is rampant with living cloth, long black twitching tongues, hair-eaters, haunters of high ceilings, obese singularities of flab, sleeping dragons, testicle weapons, insects with clicking limbs, burrowing pubic hairs and hunger. The monsters’ constituent parts are as likely to be conceptual or architectural as spook-biological, but when they finally show themselves it is always in a terrifying materiality, putting to shame the fakery of watered-down folk mummeries and theme parks and the narrow positivism of their victims. Freeman draws deeply on his zoological and cryptozoological knowledge to tear the thin veil of everyday life and let a weird materiality back into the flesh and the fabric.