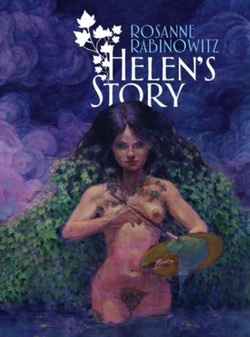 
The eponymous heroine of Rosanne Rabinowitz’s ‘Helen’s Story’ has shifted timewise. Crossing all or parts of three centuries from her birth in Arthur Machen’s novella of cosmic eeriness The Great God Pan, she dominates a narrative set across canvas and a contemporary East End poised between fashionable edginess and gentrification.

Machen has long been of interest to psychogeographers; his The London Adventure; or the Art of Wandering is one of the very best books on exploratory urban walking. But more than that, there is a fine sense of the fragility of matter that runs through all his works; a hint that that behind any wall lies a very different domain to the one it pretends to enclose. Machen’s claim that whoever “cannot find wonder, mystery, awe.... in the places by the Gray’s Inn Road..... will never find those secrets elsewhere” might happily serve for a guiding principle of mythogeography.

Helen dies in Machen. She lives again, and lives differently in Rabinowitz. Less the sum of all male fears that she represents in The Great God Pan, here she is much more her own agent and the actor of her heritage. A painter beginning to make an impact, in group shows and open houses, with her anachronistic Dadd-like landscapes. Helen is a daughter of Pan; for her, and the world of Rabinowitz’s novel, none of the usual distinctions between signifier and signified apply; what Helen represents she has already invoked. She is painting at the vanishing point, luring her visitors to put their fingers in the oils. That thin ‘veil’ which Machen would occasionally snag, Rabinowitz generously drops.

That is a big risk. Without the Victorian smoke and mirrors, epistolary hi-jinx and clever temporal framing, ‘Helen’s Story relies on direct prose to portray desire and pleasure as cosmic forces, and to outline a new totality. Where Machen proposes that such lack of mediation leads to destruction, “as.... bodies blacken under the electric current”, Rabinowitz suggests that we at least have a small chance.

Helen’s Story is a lovely read; an unembarrassed and unembarrassing hymn to pleasure and to an interwoven world of material and metamorphosis.
.