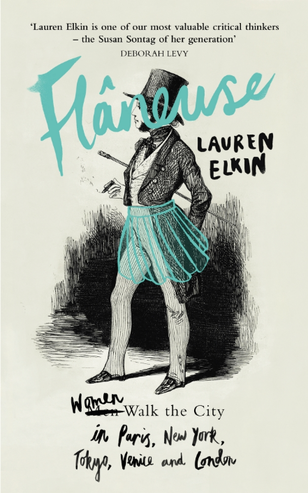 This is a special book. An important book. As much for the form and structure in which it emerges as for its content. For sure, there is an important argument here about the history of the flâneuse, the female urban wanderer of the nineteenth and early twentieth centuries, and the way that their journeyings have repeatedly been forgotten or suppressed. Equally significant, though, is that Lauren Elkin entangles that story with her own, returning again and again to the affects and subjective experiences of a woman exploring and aimlessly wandering the streets of Venice, New York, Tokyo, London and, most often, Paris. She is not always there of her own volition, sometimes following the work of a male partner, but in the streets, she is eventually able to find independence, and a way of making the city according to her own entanglement with it.

Sometimes, particularly around the middle part of Flâneuse when Elkin seems to digress at length around different literary sources, she appears to be losing her way (and ours) in texts; but just as it feels as though the book is heading down a literary dead end, the narrative magically loops literary sensibilities back to the affect of wandering, to the feeling of agency, into the experiences of the smells, bumps, grazes, portals and refuges of the street.

Elkin rightly castigates those contemporary walkers who cannot see past the “figure of male privilege and leisure” and assume it for themselves. Will Self’s comments about a “fraternity... middle-aged men in Gore-Tex” and Iain Sinclair’s “making the walker into a very British figure, the naturalist” both take a critical caning. She also rejects those who have seen and see women as excluded from the city, citing a rich legacy of flâneuses, some well known like Virginia Woolf and her ‘street haunting’ and others less so, as well as her own adventures. There is much less of anxiety and much more of discovery, agency and pleasure in her accounts: “I walk because I like it. I.... stop when I like, to lean against a building.... for the world to stop while I do it.”

If anything is missing from this book, it is an awareness of just how many other contemporary flâneuses there are, in walking arts and psychogeography groups, wandering the streets right now. A little research beyond the literary world in which Elkin is most comfortable and rehearsed would have revealed just how true her argument it is when she writes: “Once I began to look for the flâneuse, I spotted her everywhere.”

That said, this is an important book for recovering the female walker, historically and currently, from invisibility and prohibition, and for rescuing an important legacy and resource; perhaps most movingly and usefully in Elkin’s account of “Cléo’s journey from image to subject” in Agnes Varda’s 1962 movie Cléo de 5 à 7. But much more so, because Lauren Elkin weaves together, exemplarily, that legacy of female flânerie with an emotional autobiography of walking, tying her heart into paving slabs, her nerves into streetlamps and her dreams into street-level ambience. If this book occasionally reads like an important literary-historical argument, it is that and more, curling under the skin to the deep feelings in and with which the hyper-sensitized walker walks, touching the desire to walk. Anyone interested in ambulatory arts, psychogeography, drifting and dériving should get a copy of Flâneuse.