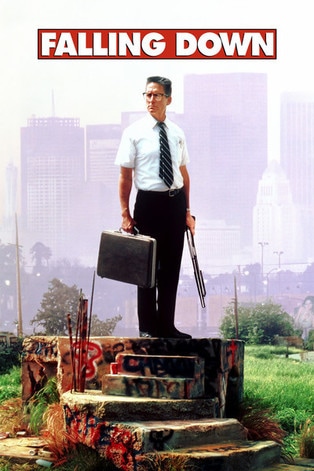 
The central figure in ‘Falling Down’ is a weapons worker who calls himself ‘D-FENS’ who abandons his car in a traffic jam and sets off to walk ‘home’ across parts of Los Angeles to his estranged family. Yet he learns nothing from his walk; and nor do we.

There are lots of great walking movies – ‘Adrift in Tokyo’, ‘Stalker’ – but ‘Falling Down’ is not one of them; it attempts to combine a sympathetic portrayal of the kind of ‘entitled disgruntlement’ that is presently coming to power in parts of the world with an odyssey narrative. But the journey, paradoxically, increasingly absents the city from the movie. The hero’s bold gesture – to ‘do something’ about his situation, to put his body into the landscape and act – is an entirely empty one that is configured as heroic in a skewed way. Yet it is nothing like as empty as the movie’s portrayal of its own terrain.

Movies are representations; the choices around how they represent can be revealing.

In ‘Falling Down’ the content is entirely reactionary, normalising violence and prejudice: finally someone is ‘standing up’ not only to the everyday irritations of broken gadgets, rude people and traffic jams, but also to the corporate lies of fast food advertising, incompetent accounting and indifferent authority.  The hero (played by Michael Douglas), having got out of his car to stand up for himself, responds, like the movie itself, as if the city is not really there, but in its place is a reflection of the hero’s aggressive disappointment.  ‘D-FENS’ can find no way to ‘be’ in this empty city; he is unnerved by small children, he cannot buy a can of Coke at a store without smashing it up. As a substitute for engagement, civility, curiosity or cosmopolitanism, every encounter is brushed aside by violence.

Although the movie deploys some tired tropes in its attempt to navigate around its hollow centre what is striking (for a mainstream movie) is the exposure of the utter nihilism at the heart of it, and in the look of it. It portrays an entitled disgruntlement that is a loop that feeds itself with new disappointments, ‘standing up’ only speeds the cycle. And once in this loop, the world disappears except as a reflection of disgruntlement.  To ‘D-FENS’ the unfamiliar landscape he is crossing on foot barely exists even as an obstacle, there is no  fascination in it for him, it is an empty and sterile stage on which he encounters enemies and irritations. And there is no fascination in it for the camera. How can you make a movie about someone walking across Los Angeles and not be interested in Los Angeles? This movie manages it.

The movie’s narrative problems (for example, how to sustain sympathy for a humourless psychopathic stalker) reflect the resilient yet self-destructive dynamic of the ideology it portrays:  of populist pseudo-anger, outrage at everything, communication through aggression and post-truth. What serves this ideology well in the short term is its shrinking material being-ness; it may begin in experiences of unsafe neighbourhoods or of job insecurity, but the message of ‘Falling Down’ is that it increasingly preserves itself by moving away from experience to reflections and representations. Part of its self-justification is that it no longer has to concern itself with the real world, as part of its miserable entitlement it demands the right to be ignorant, alienated and disconnected.  It replaces a dynamic with the real world with an acceleration towards ‘redemptive violence’ that is indifferent to its context.

Repeatedly, the action of ‘Faling Down’ moves across contrasting neighbourhoods or wanders onto wastelands or moves from little caves of eccentricity into urban expanses; yet the movie has no interest in any of that. The camera never dwells on the urban textures; barely even on its vistas.

Governments, at least in the UK have put a lot of energy over the last decade or so into trying to persuade people to walk as a means to good health. What they mean by that is that walking will reduce the strain on public health services. Hence the thumping instrumentalism of these campaigns. Even those that offer some social incentive – company, conversation, cake – are still centred around the imperative of physical exercise, and often indifferent to their context. What ‘Falling Down’ demonstrates is that there is no virtue in walking itself. It can be just as much an act of alienation from a landscape as sitting in a car in a traffic jam. It is the entanglement of the walker with their terrain, it is their involvement in co-creating the city as they walk it, it is their bringing it into being by attention and encounter – these are the constituents of a healthy walking.

‘Falling Down’ is a movie about a man walking across a city as if he were still in his car. The film’s action concludes at the end of a seaside pier; it simply runs out of ground.