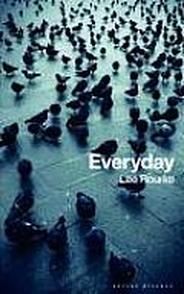 The interest in our Facebook friend Lee Rourke’s collection of short texts may, for those of us concerned with the future of psychogeography, focus on the first of the stories here - ‘The Geography of a Psychopath’ – but before we comment on that, first, it should be set in the context of the book. Which is no “context” at all. For Lee Rourke’s Everyday stories are like shards, splinters of something fabricated, but of unidentifiable origin. One doesn’t read these texts so much as insert them. Slivers of produced experience that long ago escaped any meaningful connection with their birth or design and that persist only through indifference and repetition (the uniforms of the policeman in the head). These are the microdramas, the pocket cinema, of alienation. There is no quotidian magic here, barely any everyday irony. These tales of clerks and library assistants are a sharp corrective to mythogeography’s neo-romantic take on the quirky urban landscape. Though there is occasional empathy, despite the damaged pigeons, full-on paranoia and the un-redeeming anxieties that fail to impregnate the surfaces of the city. The most effective texts evoke ordinary evil, dullness untouched even when gilded by celebrity. In ‘Everyday’, the demons have names like “David Davis”. And the most frightening thing in its world is to realise that the most frightening thing in its world is to come face to face with your double; and that each of the melodramas that make up ‘everyday’ are repetitions, reflections and alienations.

At times, Rourke’s prose is so bleached that his pieces might be Brechtian ‘lehrstücke’, teaching dramas about the appropriation of the soul. Which brings us to that opening story, for it begs a few questions about psychogeography, eroticism, control and alienation. For there is a bloodless, a-sensual psychogeography that consists in the drawing of lines on maps and repeating the boundaries of local history as if they were kinds of barricades. And it has a cousin, an equally unemotional fantasy of the glancing, zipless encounter on the drift. In ‘The Geography of a Psychopath’ these two things come together – Matt Hamilton, newly redundant, setting out on his first cartographical penetration of the city, Irina the mysterious Russian who is free with her body, but protective of her apparently bottomless knowledge of a hidden city beneath the one mapped by Matt. He kills her for the book he believes contains her knowledge. But she has fooled him. There’s nothing in the book. It was all in her. Irina is as Nadja was for Surrealism, or Sophia for Gnostic Symbolists – an object that, because it is objectified, cannot be possessed, only bought and destroyed again and again and again. When the Sophias, Nadjas and Irinas are the subjects of psychogeography, it will free itself of the bloodless fantasies and  tedious games that still sometimes (but not always) clog its practice in repetition.