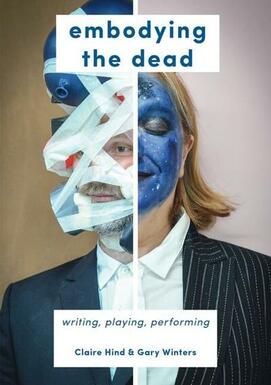 This is a remarkable book. It begins in playfulness, and moves quickly through the gears, going layer by layer to a profound and deeply affecting place. A place to be with the dead; not a tomb, but a place to be bodies with the dead, of the dead. The publication of Embodying the Dead is prescient, for the dead are stepping forward right now and we have inadequate social means to reverence them.

This book gives us some means.

Firstly by describing and inviting us into Claire Hind and Gary Winters’ own performance works, which sit somewhere in the fuzzy borderlands between the marginal high art of post-dramatic theatre (undoing certainties of representation, linear narrative and character) and the common street/bar arts of karaoke and procession/guided tour. The combination of their ambiguities – a fecund double-inauthenticity – helps to raise the ambiguous dead body (meaningless empty vessel or temple of resurrection?), when the general impulse is to hide it, forget it, burn it, bury it.

We may consign the dead body to the grave, and some can wave the soul/mind off to somewhere else. But what do we do with the memories, recordings, photographs, messages, consequences, rumours, suspicions, legacies – we have never been more surrounded by the works of people who are ‘no longer with us’. Embodying the Dead raises this ambiguity, particularly by embodying the ‘late’ singer Roy Orbison. In obsessive durational karaoke and ‘dressing-up box’ characterisations, the writers and their fellow-participants mime to ‘Crying’ through the night. Like impersonators “trying to arrest something” these performances seem to hold up a process for a while, allowing the dead singer to be dead and the revenant to move on without them. A burden is laid down, a burden can fly.

The writers describe similar interruptions/liberations. They deploy fragments from taxidermy and the Romero zombie mythos, the curated objects in Freud’s study, automatic writing, pop song refrains, images from ‘Twin Peaks’, mediumship and mischief in actions that seek to free us from guilt and into recognition of “an innate tendency in all living organisms to return themselves to an inanimate state”. Not to an ‘after life’ but to a pre-life; and in that way we get back to the lively inanimacy of the ancestors through Hind and Winters’ ‘ghostings’; spectral performances in which imitation of the living and the dead is abandoned in favour of multiple ‘as ifs’ in which, among other things, the spectator sees traces of past performances they know and apparitions of themselves. The writers wed King Lear to King Kong and then process their impossible partnership through various filters and forms until, drained and diaphanous, they arrive at the back of a night club:
“He says:
Guide, teach us what happens behind Fibbers night club.
She says:
I shall; map out a brain, Fool.
Gary gathers bits of crap off the floor to make a brain.”

This moment from their ‘Dream Yards’ performance gets to the core of their book: once the principle of a desirable and desired pre-life is accepted, then the inanimate crap of now is made repurposable for future meaningfulness. In the inanimate, life and meaning is all around. Hind and Winters are raising not the formerly living, but the life before the dead lived. This is some pretty impressive necromancy.

And that’s before they animate their Benthamite Auto-Icons ‘The Black Heaps...

This is a wonderful, profound, entertaining and resource-full book, packed with ideas and techniques for what it says on the lid: embodying the dead.