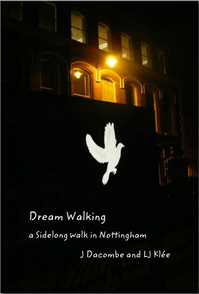 This is a fanciful map of ‘a Sidelong walk’ – a ‘documentation’ of a walk that gives you enough description not be artfully frustrating, while conveying a sense of experiment that encourages its readers to follow suit. What is described is a night walk in Nottingham (UK) created by Jo Dacombe and Laura-Jade Klée. Images made from reflective materials, unnoticeable until spectators shone their torched upon them, were placed along a mile-long circular route through the city ‘when suddenly they would light up brightly as surreal images’. Maps, clues and torches were supplied to spectator-walkers, guides to ‘hidden’ spaces; what Tom Nielsen might call ‘excessive places’ or Francesco Careri ‘voids’.

Dacombe and Klée set their account of this walk within a short narrative of their own exploring: ‘looking for something without knowing what it would be’. They disrupt their everyday ‘skimming’ gaze of the city, they re-think the city as a weave of dreams, as a person, as a view askew. They draw on the situationist dérive to respond to the logic and illogic of the urban space ‘rather than force something unnatural’ upon it. Theirs is a kind of ecology or even a botany of urban nooks and crannies. Their walking is a ‘political act’ about presence, vulnerability, the nature of ‘public’, but is closer to surrealism than situation-making. Indeed, the torches given to visitors, installations in hidden spaces and artworks wrapped in darkness all evoke (on a modest scale) similar features in the 1938 Exposition Internationale du Surréalisme in Paris.

This is a slim pamphlet, illustrated with some of the artworks in their sites. It reads like a description of the beginning of a journey, a first few steps, tentative, but brave in adventure, modest in allowing the city its dreams; rather than placing their work in the city, Dacombe and Klée provoke and illuminate the artwork that is the city; they re-stage it from and in its recesses, opening it by the offer of exploration and treasure to others. Equally, they open their process; an exemplary account and a simple fanciful map of a surprised road.