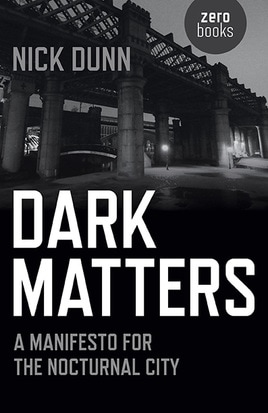 This book opens deep in the heart of the Spectacle: mourning how an urban subject’s “ability to actually do anything meaningful.... exponentially disappears.... left to wander about like the protagonist of ‘The Truman Show’, ever watched, measured and exploited”. Rather than in specific cities, this subject lives in a layer of generic urbanism. Yet, the cities themselves, wound up by the tensions “between development and decay” can never neatly fit their roles as “neutral containers”.

Given the acceleration of novelty, visuality (in the sense of seeing anything different) is, paradoxically degraded; so Dunn heads for the shadows and the “in here” of his walking body. In the night time this city is different from its daylight self; so, already there is change. Any threat is accompanied by a promise of transcendence: “supernatural qualities unfurl.... walking[‘s] rhythms are incantations”.

In the night the author opts out of availability – there is some privilege here! – and enters the “margins”, “crevices” and “interstitial spaces”. He interweaves his commentary with passages of ecstatic, hyperbolic prose descriptions of his wanders in Manchester; oddly reflecting the very dromology and brightness that he says disturbs him. Yet, there is very little that is corporeal in these walks. Though Dunn quotes Lefebvre on how space comes from the body, he describes little of this process from his own body.

In the face of the remix’s ‘détournement’ of ‘détournement’, Dunn walks. Slows. Connects. He, admirably, strips his practice from the “lazy shorthand” of citations of the situationists. He claims the mundane; despite the romanticism of his subjective ambulatory texts he is suspicious of ascribing romance to the streets. Instead, he celebrates the thickness of the dark city, its subterranean contemplation; avoiding the Hen Parties or “getting embroiled in someone else’s game”. He rejects roles of “seer” or “vigilante” and embraces that of a private intellectual. He is drawn to the “sepulchral qualities” of the city after dark.

Dunn writes beautifully of the Bartleby-like shedding of the “worries and weight of familiar roles” that the darkness can afford. He evokes the power of purposelessness, but shares little about how to get to it. Only in quotation (Pallasmaa) does a body engage the city: “my body weight meets the mass of the cathedral door”. Without myths or interpretative narratives (other than the familiar one of development) there is no space for his body/city encounter. Even when hyperbole invades his main text – “Area 51 bases of consumerism” – it is dystopian.

Dunn can “truly go in”, but he struggles to find the tentacle that goes between that “in” to the “extraordinariness of the commonplace”. Instead, he ends up in a Richard Long-like sentimentalism, invoking “our primeval origins and connection to the land”.

There is plenty to enjoy in Dark Matters, but by the final chapter Dunn is still asserting and not delivering tactics for accessing “the joy of night” or exemplary tales to get us to his dark treasures. This is no manifesto. We have to take the writer’s word for it that he knows what he writes about. We should be grateful for this evocation of one layer of walking, but there are still another 257 to check out.