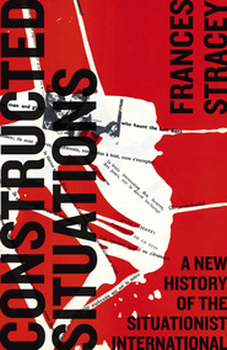 This is not a good introductory book to the situationists. Something like Simon’s Ford’s User’s Guide will serve you much better. But if you already have some working knowledge of the group, then Constructed Situations complements works like Expect Everything Fear Nothing and McKenzie Wark’s trilogy in restoring the role of art-making and art-twisting to the places denied it when the situationists battened down the hatches and expelled their artists. Frances Stacey makes a convincing argument for the continuation of an aesthetic streak in situationist praxis, even when at its most political, iconoclastic and exclusive.

Indeed, the book is best read as a set of theses rather than as a history or a critical review. And Stracey has some powerful arguments to make. First, she establishes solid ground by putting at the centre of situationist ideas the novel assertion (when the situationists first made it) that where capitalism exploited labour, a new Society of the Spectacle had been predicated on the exploitation and subjugation of the whole of life. The primacy of the material product had been replaced by the image, “leaving nothing else to see”; not a distraction by deception or illusion, but a structural digressing of “life as lived” inside representations of itself.  A diversion from which life “can be re-diverted”, by the wandering stream of the dérive and the destructive/recycling mash-up of détournement; in the former by the locating of ambiences resistant to the Spectacle’s economy, in the latter by a series of one-off games of collision and transience, less about constructing prefigurative situations for a future society, and more about endless, ephemeral passageways. No wonder Stracey struggles to find the examples to make her case; eventually plumping for graffiti, riot and situationist-oriented psychoanalysis to “entice the participants to discover precise desires in order to realise them”.

There are tantalising moments of revelatory analysis, which come and go, inviting further development (a sign perhaps of an author writing in a race against the cancer that would kill her in 2009): the task of “slow[ing]down the spectacle’s precipitate machinery” that evokes artist Douglas Gordon’s 24 hour projection of Hitchcock’s ‘Psycho’, a “decidedly non-Marxian” theory of surplus, “as if the freely given creative act itself becomes valorised as a sort of surplus of life or surplus of living”, and the challenge to refuse the spectacle without making a spectacle of refusal.

Stracey struggles at time to win her own arguments; her elevation of the importance of women in the group challenges their anonymity in earlier accounts, but never quite convinces about their actual roles in the relations of the group; and she eventually concedes that the porn images cut up and deployed in situationist journals “remain complicit with the sexual regime they are drawn from”. Her examples of contemporary ‘constructed situations’ (some hacking, the Surveillance Camera Players) could have been more expansive, though her citing of Krysztof Wodiczko’s interventions (also referenced in Cathy Turner’s recent Dramaturgy and Architecture) is adept. Yet despite these limitations, Constructed Situations is well worth the read for its theoretical developments and extrapolations of some often misunderstood concepts and for its nascent vision of what the transitory ‘passageways’ of a constructed situation might be like tomorrow.