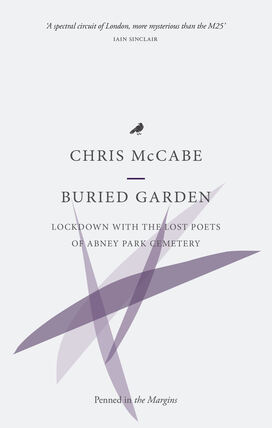 
A poet wanders repeatedly lost in a London graveyard seeking a lost poet. The obvious place to look is within himself, but Chris McCabe’s account of his search is much more like a psychogeographical mapping of places layered with voices and histories than a surrogate autobiography. McCabe is certainly present, as both guide and vulnerable visitor, but he is always throwing us off the scent of self to consider other more extensive trails: to Ermine Street, the Harlem Renaissance and dreams of family gatherings performed by the actors from ‘Brookside’.

McCabe’s ‘MacGuffin’ is the pursuit amongst the headstones of a great lost poet for each of the ‘Magnificent Seven’ great Victorian cemeteries of London. For Buried Garden he has come repeatedly to Abney Park Cemetery in Stoke Newington; a resting place that was assumed to be a very temporary one when it was opened with words of confident apocalyptic expectation in 1840.  Once gloomy and sinister, the place is now more benign and under development for hosting weddings (“the death/desire paradigm.... going viral”). Though consumption of mushrooms here is still not advised; something to do with the arsenic in Victorian bodies.

McCabe’s wanderings in the undergrowth of the cemetery are fabulously labyrinthine, every diversion is a temptation to a monodrama. Ghostly biographies issue from the turf and stone with claims to eternal truth, hopes for the return of paradise and of a right to be heard. McCabe, wonderfully attentive to past margins and the present underfoot, gives these forgotten scribes and commentators another chance.

The ‘MacGuffin’ within this ‘MacGuffin’ is a story by ‘weird horror’ icon Arthur Machen about a magical garden. Found accidentally by a character in his story ‘N’ the garden can never be reliably relocated, but abruptly and alarmingly reappears to its visitors. McCabe suspects that Abney Park is the model for this maverick garden; one which fills a Reverend with “rapture and delight” only to provoke in him “a swift revulsion of horror” in the next moment, sending the man of the cloth running away in silent fear. Throughout McCabe’s narrative there is a sense of an unstable conspiracy at work in the cemetery between its mouldering vegetation and its sensuous cadavers. That something hybrid and irresistible might step forward at any moment with the same rapidity as Abney Park’s woodpigeon that “fires the rifles of its wings” and as eccentric as the “man with a pink hat and an eye patch.... still as a heron” encountered on one of its paths.

With gravestones for calling cards, McCabe introduces us to a number of minor poets buried at Stoke Newington. Isabella Banks, the ‘British Israelite’ Hibbert Newton, Josiah Conder, Emily Gosse, dramatist Thomas William Robertson, Alexander Japp, the radical Mary Hays, and the Reverend Thomas Toke with his “flowering spire”. Their poems are marked by an occasional startling image (a bending crucifix!) and more consistently by metrical care, but too often they quickly succumb to homilies and peter out in archaic phrases. Weighed down as they are by sectarianism and cliché (every “portal” is “immortal”), it is difficult at first to understand McCabe’s enthusiasm; but in the end he finds his great lost author, though working in a wholly different temper, place and disposition.
​
More importantly, however, these mostly forgotten writers provide the excuse for the journeys themselves. These are walked mostly alone, but with occasional companions, including a particularly insightful Iain Sinclair. From McCabe’s vivid descriptions of what he sees – a “slug, gorging on a dog dropping”, a monument like “a stone jelly baby” – and the abiding sense of “the ancient path beneath the paving stones, the ghost memory of repeated rituals”, we get the sense of impending resolution. Not so much in the rediscovery of a great lost poet, as in the recovery of a great lost garden. McCabe’s obsessive attention pays off. What McCabe has unfolded is the layering of atmospheres and the power of place stories. The details he assembles constitute a living ambience: “look at things long enough and they start to cohere; the pattern was there all along.”