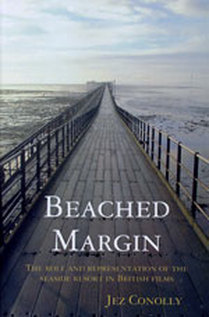 O we do/don’t like to be beside the seaside. Jez Conolly’s book explores the ambiguity of liminal spaces in English seaside towns through contradictions in and between the movies filmed around and about them. He approaches his subject both as a researcher and as the son of a seaside cinema manager; a pleasing mix of analysis and personal reflection. He deploys, lightly, a number of theoretical strategies, detects some resonant connections and is always readable and engaging.

Conolly defines the seaside as on the margins, a place where social slippage and individual reinvention is possible, where the collective is unravelled in spectacles of familial and romantic dramas set against a “metaphysical.... threshold”. He explores seaside towns as places of gazing and exhibition (I recently watched a 1950s British Transport Film called ‘Holiday’ which casually flicked over a Blackpool sideshow with the strapline: “How Could They Let It Live?”), once dotted with ‘What The Butler Saw’ machines, coin-operated telescopes, camera obscura, animated displays and sideshows, and more recently in Pawel Pawlikowski’s Margate-set Last Resort (2000) as home to an internet porn economy. Citing John Urry’s work on ‘the gaze’, Conolly describes the “lidos, crazy golf courses, aquaria and waxwork museums” as “heavily mediated spaces” and demonstrates how parts of that mediation, and examples of it, are the movies made and watched in them.

There are coherent developments in seaside movies; a shift from the social and sexual mobility of pre-Second World War films to post-war narratives of post-imperial decline and nationalist anxieties about the Americanization of popular culture. The romantic adventure of the young woman mill worker in the 1927 Hindle Wakes, transformed by her place in an economy and seizing her chance to bite the hands that feed her, is replaced by the glum humour of Tony Hancock’s eponymous turn in The Punch and Judy Man in which the economy of the seaside town of Piltdown  (with, as Conolly points out, its connotations of fraud) is itself in question.

Lindsay Anderson’s O Dreamland (1953) follows an orthodox Marxian miserablism about popular culture in a Frankfurt School style. Other movies, however, show a more nuanced portrait of the spectacular economy. The System directed by Michael Winner in 1964 depicts “a liminal seaside carnival experience... that works to contain as much as to release youthful energies.... allow[ing] a limited expression of independence and liberty within designated, mediated and constrained spaces”.

Globalisation and migration have shifted the seaside towns closer to the centre of the everyday; as places of displacement and (sometimes) hostile refuge; Conolly quotes a Dover newspaper referring to “human sewage”. Yet a metaphysical otherness persists, interspersing otherwise neo-realist movies; in the “shots of huge and beautiful cloudscapes looming over the sea” in Last Resort and the sexual surreality of dolphins as “expression[s] of desirable otherness” in Phillip Saville’s The Fruit Machine (1988). While noting the notions of these spaces as “relic[s]”, Conolly is just as alive to their capacity for reinventing themselves as allegorical identities; once a sensual playground they are open again as an ideological playground for the post-tourist and the hyper-tourist in movies like Andrew Kötting’s Gallivant of 1998.