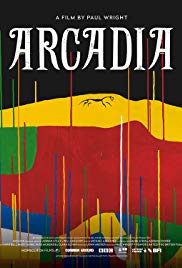 ​Given the promising materials from which this art-documentary is wrought, this is a hugely disappointing outcome. It would be very easy, given the wondrous nature of the resources – footage of folk customs, naturists, convoy culture and early twentieth century villages – to bathe in the poignancy, occasional weirdness and nostalgia, even as they stand here. But there is real nastiness here in the assemblage, which in other contexts might spill towards something worse.

‘Arcadia’ is bookended by references to a “maiden”, coy parlance for a virgin, who is represented as an objectified female body (often naked) standing in for the land. We quickly burrow down into this “soil”, but without the forefronted horror of David Lynch’s revelation of the bugs beneath the lawn, to time-lapse bacteria and buds accompanied by angelic choirs. Alarm bells ring. Too often the aesthetics here are consistent with ‘Ewiger Wald’ (1936) the Nazi propaganda movie with its exquisite monochrome forests intercut with images of ‘decadence’ (ie. Jewish everyday life).
“This is the land we have all inherited... our fathers and their fathers...” intones the sampled narrator; is this ironic? There’s a touch of ‘Decasia’ in the use of slightly distressed footage, but the movie soon gives up on that. It screams “authenticity!” but can’t quite decide where this settles: on the ecstatic dowser, on the monstrous Padstow ‘Obby ‘Oss, or on the stones of Stonehenge policed by an Edwardian bobby? Those three examples (and there are many more here) are not part of a consistent ‘otherness’ but stand in difficult and complex relations with each other. There’s no account here, for example, of the police presence at Stonehenge, but given the apparent age of the image it may well be due to the contested access to the stones when, among other groups, early Druidic socialists claimed the right to worship there. Eventually that particular battle seems to have resolved itself into the establishing of various mystical-socialist health camps and in ‘Arcadia’, in a similar spirit, there is wonderful footage of naturist hijinks in something like these holiday camps. In this footage (from the 20s or 30s) the male and female naked body is treated without particular distinction; but in the movie itself, the specially shot footage for the film is exclusively of a naked female body.  This is typical of a general clumsiness that characterises the assemblage; a too eager clasping to stereotypes and dominant tropes.

I got a little angry here; I remember my Mum and Dad who grew up in rural communities during the war, my Mum fighting diphtheria and TB, my Dad a teenager as thin as a rake in a photo I have (he was barrel-chested in his pomp); they never expressed any affection for those tough rural worlds and seemed glad to escape back to the city. Grimy faced children might represent an ‘arcadia’ of freely grubbing around in the fields, but there was suffering, illness and early death too and the film pays no attention to that. Death is only symbolic in the movie.  Later, there are quotes from the communistic Diggers (“the land a common treasury for all”) and juxtapositions of images of the country elite with poverty-stricken kids, but by then the movie has squandered its moral authority.

The movie does get a little more complex, slicing “psychedelic freakouts” with folk dances, and evoking the death-in-life (rather than life-after-death); however, the dead hand of homogenising ‘milieu’ falls upon these sequences, in both hippy and high-Anglican variants. After ‘Arcadia’ briefly goes all Caspar David Friedrich on us, it veers into images of mass production, private property, pesticides and blowing up tree roots. Evil quarrying is juxtaposed with images of virtuous Stonehenge: er, how does Paul Wright imagine the henge-builders came by the Craig Rhos-y-felin bluestones if they weren’t quarried? Industry is evil; so where do the transformational metalworkers/magicians  of the Iron and Bronze Ages (not to mention the post-renaissance British alchemists like Sandy Napier) sit with that? Similarly, given all the footage of country life, why is there never any sense of the industry of agriculture: no markets, no buyers’ agents, no slaughterhouse (I’m biased, as the great-grandson of an abattoir owner), no milking, no simple processing of grain, no brewing, no blood pudding, no smoking and curing of meat, no producing of any kind. Only harvest. As if the Edwardian countryside were a placid, vegan and stable provider requiring nothing but a quick plough and a strenuous gathering in.

This un-traded and de-economic ruralism is the backdrop to a sky-clad objectification of a naked woman (the inter-title UTOPIA is followed by an unexplained still shot of a naked barely-pubescent girl) – completely different in framing to that of the 1920s footage of the naturists – this is the thousand year old “secret”, apparently. Then we’re back to the rural poor, intercut with images of maggots, which really did conjure up Nazi aesthetics, though I’m sure that was not the intention; triggering more discomforting (for the wrong reason) images. Yes, fine to intercut images of ‘decadence’, of mass production, meat products and the sex industry, but why are there naturists and hippies inserted into this sequence? Isn’t this re-warming a form of ruralist Puritanism? ‘Look how the moderns ruined the innocent country ways?’Then the knife is twisted deeper and we are into paranoia, riots, chemical warfare, anxiety, the Boscastle flood, devils and “the end of everything” – to which is counter-posed “the truth is in the soil”. I doubt it. Not the ideal soil that features here; more likely there is something worthwhile abiding in a mutating soil that has no respect for the neo-Platonic and absolute ‘truths’ paraded in ‘Arcadia’.

In an apparent move to redeem its subject, ‘Arcadia’ rips images of resurrection, villagers rising from the graves, from David Gladwell’s ‘Requiem For A Village’. Then, it, chillingly, ends with the suggestion that all should start again for “the past is gone”; unknowingly (I hope) citing a key tenet of shock capitalism.

I wanted to enjoy this film. I failed.