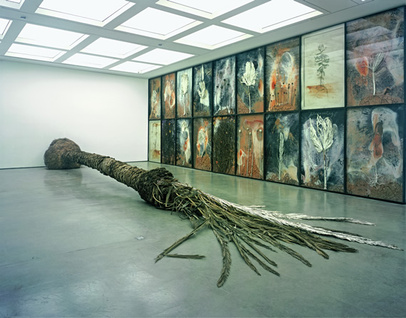 Visit the Anselm Kiefer exhibition in Louisiana (that's the one north of Copenhagen with the magnificent modern art gallery not the American one) and, in 2012, you'd have found an exhibition called Art and Myth. Aha, you cry, the author has found a tenuous link between Kiefer and Mythogeography.

But, soft, not so tenuous. As Kevin Hart says in his review of Myth, Mourning and Memory (jointly created by Kiefer and Paul Celan):

“When Kiefer looks at one of his particular objects - an attic, a field, a winter landscape, railway tracks, a book - he sees all its layers, the mythical as well as the historical, the distant past as well as the years leading up to the Third Reich”.

I think that’s rather what Crabman is on about (though he's not especially Third Reich-oriented).

Furthermore, "Kiefer can be seen to enter history at a particular point, and indeed much of the art that he practices turns on choosing the right angle of entry and, once behind history, making his way along its dark side to find what best to expose".

If you've ever followed Crabman about Exeter or Plymouth or A La Ronde or wherever, I think you'd recognise something of this approach. Incidentally, have you noticed how dogs being obviously submissive come at you sideways, crabwise, to avoid confronting and yet get close? It's an early form of cloaking, I think.

Anyway, there's more, in the exhibition notes I read:

"History is not identical to the past. It is not just the past, but all of time, the great unified mechanism, that Kiefer is interested in, and in a certain sense is trying to avoid. In this way the landscapes are primal images: enduring scenes that can encompass both slow time and the moment as it arrives, something universal and something private, history's aggregate of movements, efforts... and rents in this fabric of the present with bullet holes and something leaking out.

...throughout most of the 20th century the artistic avant-garde has been preoccupied with the present and the city and what is to come - not the landscape and history and all that clinging past that was experienced as difficult material and reactionary subject matter."

Now I think that's Crabworthy. Isn't mythogeography precisely about something leaking out, Crab? 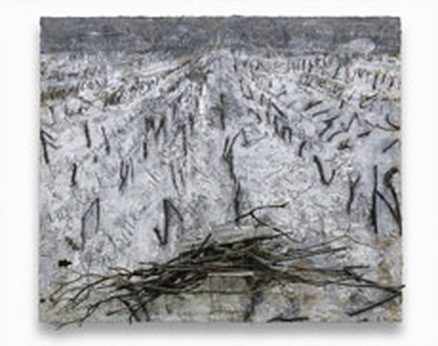