All The King’s Horses 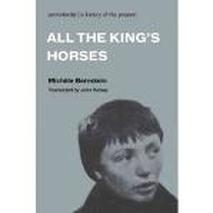 Commentaries and promotional blurbs that accompany All The King’s Horses tend to exaggerate any insight it may offer into the techniques, tactics and theoretical foundations of the Lettriste Internationale/situationist ‘drift’ or dérive. While there is a passing reference to “mainly walking” as the central male character’s profession, and urban walks do at times move the plot along, these are details that are never developed, consistent with “a void the band had meant to conjure up” (Greil Marcus). Instead, however, this novel may shine some light through that void to things at the heart of LI/situationist project that are far less tangible and far more problematic.

Michèle Bernstein, a founding member of both the LI and SI wrote All The King’s Horses at the suggestion of her husband Guy Debord. It may have been a fundraising venture, pure and simple. Bernstein dismisses her novels as “jokes”. There is no reason to suggest that the characters Geneviève and her husband Gilles in the novel are not ciphers for Debord and Bernstein, nor that the frankness, openness, contradictions and painfulness of their fictional relationship were not parts of their real one.

However, if All The King’s Horses is truly an attempt at a détournement of a novel of ‘contemporary mores’, then it steers far too close to its original model to effect any real disruption. Instead, what we get is a conventional affair – husband, wife, mistress – but with a wife who is a revolutionary and struggles to retain her relationship with her husband through ‘non-bourgeois’ means. Reading this book today it is none too easy to tease the ‘bourgeois’ from the ‘revolutionary’. For the playing field (Paris) seems already tilted: as Gilles looks to his wife for a shared taste in places and partners, in the ‘real work’ things are not so equitable: “Gilles knows how to reinvent Paris. For me, the Left Bank consists of a few café tables.”

What is here is a highly ambiguous document about the costs of a loyalty to the meeting point of ideas and people constructed upon uneven ground; while the fictional characters of Bernstein’s tongue-in-cheek narrative are reconciled at the dénouement, their sensations and arguments remain unsatisfyingly entangled. A light read with a heavy, tilting ballast.