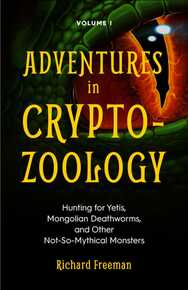 
We have little to fear from a love of monsters; what we have to lose is homogeneity, exterminism and a kind of sentimental identification defined by wall-like categories. We need not be passive in the face of time and science; we cannot re-hide the Kraken, but we can re-understand the Giant Squid as uncapturable by the cameras of any TV Nature Documentary, no matter how clear, no matter how deep.

Inside the covers of this book is a studious account of the unfolding science and practice of seeking out and identifying ‘hidden’ animals. Yet, that does not even begin to describe the qualities of Adventures In Cryptozoology. For Richard Freeman has given us a multi-dimensional approach to understanding an assemblage of disparate life forms (and they are that and more) united by their straddling of uncertainty.

In the case of animals like the Coelacanth or the Megamouth Shark, the organism has successfully crossed from the darkness of its own shadow into a dazzling light of recognition, representation and classification, and entered the strange state of being known indifferently; ignored-by-fame, hidden from empathy by what passes in zoology for glamour. The last time it was surveyed the Coelacanth’s numbers were falling. But most proposed cryptids (for they are speech acts as much as organisms) are far more numerous and central to this book; they exist at a meeting point of fable, biology, ambience, landscape and intuition, and possibly nowhere else. Between classification and legend, they are suspended where they become multiplicities, evading the crass, normotic identity that every moment stalks the readers of Freeman’s books (a second volume is at the press).

These cryptids are exemplary beings, individuated by their potential for nothingness, characterized by their resistance to categorization; so powerful is this that where cryptozoologists attempt a taxonomy even the classifications themselves take on a thrilling life-of-their-own. Take the vibrant materiality of Bernard Heuvelmans’s In The Wake of Sea Serpents categories: Long-Necked, Merhorse, Many-Humped, Many Finned (with its “scalloped tail, plated skins, and spines protruding from its sides”), Super-Otter, Super-Eel, Father of All the Turtles, and Yellow Belly. Each category will raise a sea monster for anyone who has sat in a small craft over deep waters or felt the shift in the sea made by great bodies; each reader worth their salt will raise their own intuition-beasts.

There are fascinating patterns across Adventures In Cryptozoology. The proclivity of the almasty, orang-pendek and other ‘wild men’ to throw rocks. The way that the beasts evade not only photography but every kind of representation (“he switched the recorder on, but the call did not come again”), as if they move in Heisenbergian uncertainty, the regularity with which their specimens disappear in labs, the way they are woven into their terrains: logs, oil drums and mounds turn into monsters, there’s a sea beast with a “head the colour of the rocks in the bay”, a search for a crashed USAF jet in Lake Ikeda reveals “a large object moving through the water below”. Sometimes the weaving is an unraveling: “the thing’s presence seemed to change the whole landscape…. It did not seem to belong to the present scheme of things”. Sometimes, the cryptids are made up only of their effects; “something huge on his bait…. pulled with such force it overturned the boat”. They manifest as the fauna of disgust (“abomination”, “obscene”), are generally impervious to weaponry, pose little threat to humans (unless we count humans’ fearfulness of them), they loop and then loop again, have symbiotic relations with comedy songs and newspaper stories, and they are hybrid – descriptions of them slither across species – the lau “as thick as a donkey” has “facial tentacles with which it grabs its prey”, there’s a lizard whose “four legs resembled a cat” with “a snake-like head with black shark eyes and fangs” and “featherless wings”, another beast is “like a flag flapping”. They are hybrids of hoax and of hoax confessions of hoaxing; they are cover-ups for human crimes,dark misogynistic echoes of ecocide.

And they are real animals.

We have all got too habituated to the surgical-critical separation of beast and story. Not Richard Freeman. His cryptids mess with perceptual certainties: “Bob concentrated on counting the ribs but stopped when he got to six as there were too many” (stopped at six? Bob’s concentration has been severely affected!), “we never saw the rear end of the animal…. but it had to be at least sixty feet” (but its arse could have been at the other end of the Milky Way!)

Freeman is Fortean in his assemblage of details, he makes the reader work. Messages do not come in statements, but in the relations and gatherings-together of the details. “Monstrum”, as Freeman reminds us, means revelation, and the monstrums here are of a special kind; not revelations of universal truths, but of general uncertainties, of an ecological ‘life’ at the edge of the abyss, of an existential zoology that is always threatening but only very occasionally materially manifesting as multiplicity in its hairy, stinking, spiny fullness, near enough for the reader to reach out and touch just the once. Revelatory encounters that are more effective in loosening observers’ categorizations of themselves and everything else than subjecting the beast to them.
Much of what passes for scientific ecology (and ‘conservation’) has only served to damage the actual ecologies by a reductive and conservative characterization of the fauna as a swelling series of specimens, driven by a Newtonian clockwork-normotic will to isolate and classify and then re-thread discrete entities in ‘food chains’. What Adventures In Cryptozoology does is provide us with a multiplicitous and plasmic ecology in which we begin to sense how we are not so much bound in food chains as collectively flowing in currents and weaving (as hybrids of place and organism ourselves) in webs of fable, hunting, fins and spines, intuition, uncertainty, meadow, forest, fear and wonder, Kraken and Squid; an ecology we might be far more willing to be part of and not exterminate so readily.