The Art of Wandering 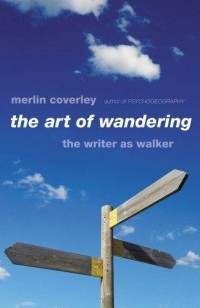 The Art of Wandering: the writer as walker
Merlin Coverley
Oldcastle Books, 2012

It is a pleasure to be able to recommend this book. We have not entirely suppressed our thoughts on the shortcomings of Merlin Coverley’s Psychogeography (Pocket Essential, 2010) - not least for its appropriating a title for an almost exclusively literary take on the subject – but here we have a far broader and better researched (and inspiring) survey of walking and writing. In The Art of Wandering Coverley shows a deepening understanding of different strands of aesthetic walking and, while there remain blind spots, this welcome depth helps him to turn up numerous gems for practitioner and student alike.

There are reasonable accounts of melancholic walking (Rousseau, Kierkegaard, though he seems to miss Sebald) and of walking as a ‘way of living’, but The Art of Wandering takes off when it addresses pilgrimage and, later, modernism.

Pilgrimage here takes many forms – even an indoor penance – walking around a prisoner cell a distance equivalent to a pilgrimage to Rome (evoking a Lone Twin performance in which they covered, on the flat, ground equivalent to a journey to the summit of Everest; then transferred the distance to the everyday walking of their audience). This is picked up later by Coverley in what is perhaps the highlight of the book: a description, as disturbing as it is engaging, of the walk of the Nazi Albert Speer around his gaol yard in Spandau Prison, progressing ‘around the world’, still invading, still grabbing place: ‘July 13, 1959. Arrived in Peking today.’ His guards began to join in. Hmmm. From Bunyan comes the thought that ‘the act of walking... may as often take the pilgrim off his true path as advance him along it’.

Werner Herzog’s spontaneous march to Paris to heal Lotte Eisner receives deservedly extensive consideration. John Clare’s ‘homeless at home’ is a powerful pedal motor. The sections on the Romantics cover familiar territory and add little to what Rebecca Solnit and others have written; though a caustic comment on Hazlitt has some bite: ‘his ardent observations of rural purity are offset by the impression that he longs to return home to write up his notes’. By giving extra attention to those who immediately follow, Coverley does not seek to disguise just how quickly so many nineteenth century paeans to walking pall and he quotes Solnit to good effect: ‘both walk and essay are meant to be pleasant... so no one gets lost and lives on grubs and rainwater in a trackless forest, has sex in a graveyard with a stranger, stumbles into a battle, or sees visions of another world’.

There is plenty of visionary walking in The Art of Wandering: from Piers Plowman – ‘England and nowhere. Never and always.’ – to Blake and the surrealists; this is a walking that is ‘forgetful of maps or description, but hungry for real colours... and the seeming of things’. De Quincey’s now familiar ‘sphynx’s riddles of streets’ are pleasingly unseemly with the pleasures of finding ‘terra incognitae’(and presumably a convenient anonymity) in the big city. In these puddles Coverley has turned up some unfamiliar things that may be worth an urban beachcomber – not least James Stewart’s 1812 Roll of a Tennis Ball through the Moral World. Irrationalism feeds through to  Coverley’s account of various modernist pedestrianisms – from Arthur Machen’s displaced urban neo-romanticism, Virginia Woolf’s formal wandering, and (after some treading water with elusive flâneurs) the de-ambulations and détournements of the twentieth century. Rather than following Solnit and dismissing psychogeographers as neo-flâneurs, Coverley now seems to have grasped (with some help from Simon Sadler) the militant (if not military) implications of the dérive. He ends, bathetically, on familiar London literary territory, relieved by the emergence from the depths of a barely existent Middlesex of Nick Papadimitriou.

There is one howling silence in this book. Where are Amy Sharrocks and Cathy Turner, where are Yoko Ono, Janet Cardiff, walkwalkwalk, Esther Pilkington, where are the Peace Pilgrim, Alyson Hallet, Ali Pretty, Germander Speedwell, Rachel Gomme, Kerrie Reading, Simone Kenyon and Tamara Ashley, where are Michèle Roberts and Carol Robertson, where is Dee Heddon and Misha Myer’s walking library, where are the Miss Guides of Vancouver... where are... where are...? Coverley’s uncovering of (near) contemporary walking – assisted by a new familiarity with other writers like Francesco Careri – has not extended to women walkers, but given the leap from Psychogeography to The Art of Wandering, can we hope?