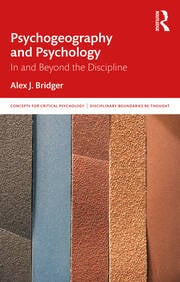 Psychogeography and Psychology: in and beyond the discipline
Alex J.Bridger  (Routledge, 2022)
​

Anyone who considers themselves engaged with psychogeography or what Bridger calls ‘the new psychogeographical movement’ (pretty much anyone using playfully deployed walking in some kind of critical practice) should read this book. It only give clues to answering the barrage of questions that it rains down on the reader as it tears apart assumptions about what psychogeography is; which leaves the reader an unusual freedom to think for themselves.

Although this book is aimed primarily at a readership of academic psychologists, encouraging them to expand their activities beyond therapy to activism, and challenging acceptance of “the consumer capitalist order of things” within “mainstream social psychological and environmental psychology research”, there is much here – perhaps, disturbingly so – of relevance to those engaged with psychogeography outside of academia or psychology. (It’s published at an academic publishing price, so you will probably need to get it through a library.)

Psychogeography and Psychology digs down into the very process of understanding and acting; it subtly levers apart the assumption that a critical analysis inevitably leads to an antithesis and suggests (no more than that) a way to reconnecting those parts through gaming. Bridger radically challenges psychogeography’s association with walking as a diminishing and “quite limited” understanding. Though proposing a ‘new mobilities paradigm’ to psychology, the author’s best resource is a return to the creation of those ‘situations’ able “to lead to radical social change and to a world beyond capitalism” not in themselves, but as provocations to “sow the seeds of revolt…. actualised by the people”.

Alex Bridger expresses his frustration with academics who “only go so far as viewing it (situationist psychogeography) as an art practice or in an a-theoretical-manner” and actively demonstrates how difficult it is to break from such modes in practice; the examples he give of his own case studies often end up with “sculptural exhibits”, “artistic outputs” shown in an art gallery, “an exhibition of photographs and text”, a theatre script, and so on.  As Bridger demonstrates, the playful psychogeographical dérive is a well-proven provocation to participants to “change perspective”, but any shift from that to creating exemplary ‘situations’, let alone ‘revolt actualised by the people”, is hard enough to imagine, let alone to do. However, Bridger has a suggestion.

The key proposal here is for a reorientation of psychogeographical practices to class war-gaming. This refers to an actual board game created by Guy Debord in the last phase of his practice to present, in his words, “the forces of contention and the contradictory necessities imposed” – with opposing units of cavalry and artillery navigated around forts and mountain passes – with the intention of drawing lessons to be applied in other contexts of class warfare. While Bridger does not describe the mechanics of the game in any detail – which makes it hard to judge whether this is simply a return to a Leninist-style leadership circa the Russian Civil War (generals ordering Red Army soldiers around) – what Bridger draws in more detail are four principles of class war-gaming, previously articulated by Richard Barbrook: psychogeography, participatory creativity, detournement and provocation.

There are no illusions here as to the scale and complexity involved in deploying any one of these four principles. In a script written with Tina Richardson, based on Ballard’s The Concrete Island a character states that “[i]n order to demolish the spectacle, we have to put ourselves in the spectacle”; which begs the questions ‘do we even have that choice?’ And, whether by choice or not, how complex is it then to deploy detournment to undo its meanings when the spectacle itself habitually deploys detournment in memes and mash-ups to construct its matrices (something that Bridger, through the example of John Nada’s sunglasses in the movie ‘They Live’, is clearly aware of)?

This book cries out for a second volume, to explain and give examples through case studies of gaming for how we might navigate the forts and mountain passes of the spectacle (“contradictory necessities imposed”) by the deployment of tactical and strategic movement. What would that mean, practically and theoretically, in different contexts? What moves? Moves through what? In ‘They Live’ even the simple action of seeing and showing is necessarily violent; is that what is involved here? Is a militarisation of the dérive proposed? And what is beyond art that is more than formalism and mash up? Or nihilism? Psychogeography and Psychology is a tantalising read, but whether it really has the ideas to break us from our “pleasure in the ideology” (Žižek) will take another book (and many more practical examples that achieve outcomes beyond art making) to know.

In the midst of Psychogeography and Psychology, Alex Bridger mentions May 1969, a year after the famous 1968 Paris uprising of students and workers. I happened to be in Paris in May 1969. I was only just 13 years old, but I remember the slogans on the walls: SAME AGAIN THIS YEAR. Of course, there was no repetition; one cannot simply summon up the contradictory necessities that create the grounds for refusal, re-meaning and throwing over. Now, more than half a century later, what is imposed – mental health crisis, loss of hope, racist government, climate change, rising toxicity in misogyny and policing, real immiseration of the low paid and unemployed, collapsing public services, academia reduced to market principles – is as vicious, if not more so. Is a return to Debord’s ideas – SAME AGAIN – the right and effective way to respond? Or will it take an entirely new praxis we haven’t seen yet?
​