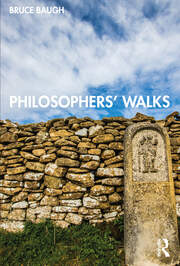 
This is a big book, despite being less than 240 pages. The thoughts come so densely, and any respite in the minutiae of described wanders is drenched in thinking too. I found it a book best to read slowly, in its parts, with so much to savour, so many rebel thoughts of my own bubbling up, and then, abruptly, it swings around. In Tavistock Square, walking to connect to Virginia Woolf’s thinking, “it hit me.... The kaleidoscope of people hurrying and sauntering.... was the one, omnific Life that I had been seeking, playing itself out before my eyes”. Hard hikes up Swiss peaks and treading the pavements of Copenhagen all close in on this moment, the found objects of different strains of philosophy – self-overcoming, chosen acts, subjective truth seeking, a hidden pattern – are drawn together into a webbing of sense. Yet, I think the real treasure of Philosophers’ Walks by Bruce Baugh, Emeritus Professor of Philosophy at Thompson Rivers University and student of the walking arts, is not this hard conclusive gem, but rather the preceding parts in themselves, the ruminations and the turnings over of ideas as they are passed along deceptive paths, by missed monuments, under mist descending on anticipated routes  and through wearying urban streets.

In the parts, I was sometimes a willing student and sometimes disruptive and combative. Descartes offered a pleasant refresher in familiar ideas, Breton chasing Najda was as irritating as ever, but with Sartre and de Beauvoir – the former intellectually, the latter actually – I got very vertiginous, I hung on to ideas as if my life depended on them, at the same time wanting to leap out and test them in the void. A gap between philosophising and illustrative examples often breaks down in Bruce Baugh’s prose. The most powerful example is probably a “nothing”, a very real “nothing” that sucks up anxiety into a moment “without any obvious motivation or objective foundation” and brings us to a “vertigo of possibility”, a choice. Whether it be the enthusiastic walker de Beauvoir stuck on a mountain ledge, or the reluctant walker Sartre stuck in his restaurant chair, with them we are in the same ‘situation’. And here is the structural drama of the book. For on the one hand, Baugh sets out, repeatedly, to find what particularities of certain philosophers’ walks and routes might have informed their ideas, while at the same time he is driven by a counter-force that fires his sentences to light up analogous dilemmas, suggestions and situations in such variegated circumstances.

The disconnect between Sartre, free to escape or “go beyond” nature, and de Beauvoir in a “trusting abandon to nature” is the material for Bruce Baugh’s conclusive synthesis, but  the glue he needs to bring the pieces together is the ‘imagination’ described by Samuel Taylor Coleridge.  For this poet-thinker, imagination unifies multitudes of events and experiences, the “imaginative anticipation of the whole composition” in poetry or philosophy working like a walker locating many experiences and events in the unfolding of the ‘one walk’. There is a hint here, within this organising ‘imagination’ of an organicism to come. ‘Imagination’, perversely, regulates; “individual words within the unity and rhythm of the line” are like individual footfalls inside the overall narrative and image of the walk. This pace-centred, one step after another, approach to walking reappears at the very of the book when Bruce Baugh attempts to answer his students’ questions about Stephen Hawking’s thinking, by equating his wheelchair mobility to a kind of walking. Yet, though this is inclusive, there was no ‘step by step’ for Hawking; so, empirical evidence should change the argument: what Hawking’s mobility had in common with walkers who were able to use their legs was in the ‘fascia’, our common sheet of gristle that responds to all our movements, not to a uniform pace.
I got less from the lonely self-overcoming of a “solitary walker” (Nietzsche) who is “self-sufficient, able to go where he likes at a pace of his own choosing” – though I enjoyed the interplay of an elusive pyramidal stone and Nietzsche’s reversal of perspectives – than from the sociable self-examinations of Søren Kierkegaard ambling around Copenhagen. Despite his faith and theology, Kierkegaard’s multiple disguises, covert thinking, demand for truth in subjectivity, rejection of the meaning of state-sanctioned meanings, and his playing the role of a secret “knight of faith” who “blends into the crowd... utterly undiscoverable” all speak to the needs of now.  Reversing the movement of ‘Philosophers’ Walks’, Kierkegaard does not conclude with a leap into idealism, but rather “gain[ed] back the whole of finite, corporeal existence ‘in virtue of the absurd’, through a leap of faith”.

For me, Kierkegaard stands this book on its head. Or maybe it’s Baugh who upturns the Dane?

Whichever it is, Philosophers’ Walks is a big-hearted enough book to hold within it many alternatives; it invites a walk within its arguments, gives a reader the freedom to leap or turn back, assume alternative perspectives, o’erleap themselves, or  miss things and return to find them. If Kierkegaard is the book’s dissenting voice, Virginia Woolf’s brings it to its organicist conclusion. For, just as Woolf combined rural and urban, close observations of subjectivities with their weaving into “one underlying reality that connects them all” are, in Woolf’s own words parts of “one Mind, one omnipresent Mind, Omnific”.
Teetering on a precipice, with a vertiginous possibility of disappearing by virtue of one’s own faintness (“the unseen part of us, which spreads wide”) with a mild hope of surviving by “haunting” things, the temptation – particularly, perhaps, for philosophers – is to float out of the fascia and into an “omnipresent Mind”, up through the top of the symmetrical monument, rather than spreading wide in sheets of puckering fascia. Yet, the great joy of this book is that it lets you think in each of these ways, at first successively, then at once.