On Having No Head 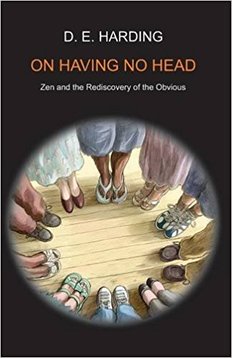 On Having No Head
D. E. Harding
The Sholland Trust

The opening pages of this book quickly reveal why it might have been recommended to a mythogeographer. The revelation to its author that he cannot, unaided, see his head – a scenario deployed in Susan Blackmore’s Consciousness (2003) from a different source but to the same end – allows the world to rush back in to where an illusion of self had reigned.

Where this book is strongest is in its advocacy for the obvious, for pushing observation beyond common nonsense. Where it is weakest is in its longing to turn these bits of wisdom and plain noticing into absolutes. So “vacancy” – Harding’s account of a shift down through tissues, cells, molecules, and so on, like a philosophical remake of ‘The Man With X-Ray Eyes’ – is too easily superseded by a quantum vacuum, nothingness is bested by probability and potential, and the voided ‘I’ is maybe less convincing than J. J. Gibson’s active model of perception; metaphorical face-tentacles as appealing as – complementary to, even – Harding’s missing head.

Whether absolute or not, Harding sets ideas on journeys; escaping a mere “bag of blood and corruption” to walk with martyrs clutching their decapitated senses, in bodies “like dew and lightning”. Even in the Zen koans, when the head disappears, the smile (‘Alice’-like) lingers. When the body pauses, between strides, the gap is the world’s rather than the self’s; the gap is still part of the world in geography post the spatial turn.

This is a book to read warily. There are a lot of knives and symbolic beheadings. Though Harding is admirably frank about how quickly revelation compromises itself, still there are dualisms here that creep in as holism, a sentimental “we suffer because we overlook the fact that we are all right”, a privileging of “inner” despite its ego-vacancy and of a state that leaves a person “in no doubt about where he’s (sic) coming from.... immediate, intimate, and indubitable” which is exactly what the algorithms are after...

Despite its smuggling back in of a faith in “God himself who is the arch-unknower!”, if we can, nevertheless, read that as probability rather than conviction, what remains in On Having No Head is a “meditation in the marketplace”, where “the swamp is the lotus” and a “’whole body’ alertness” replaces “the ‘heady’ intermittent sort.