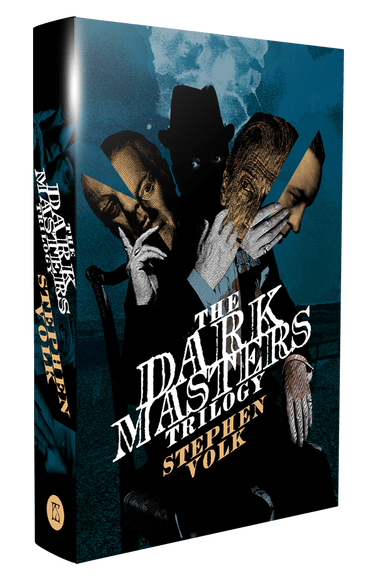 
I usually have to write a review from notes, but for this collection of three mind-gripping novellas, I have no need for them. The images, engrossing narratives and descriptive details are still seared into my imagination, in the gentlest possible way. For a dealer in suspense and something like fear, Stephen Volk never resorts to ‘grossing out’ the reader. Instead, no matter how visceral or heinous his subject, the stories bring us to the edge of an abyss so we can observe at close hand the nature of that edge, its very edginess, its invitation, the in-between space before humdrum everyday life drops into something utterly other.

The ‘Masters’ of this collection’s title are actor Peter Cushing in Whitstable, film director Alfred Hitchcock in Leytonstone and for Netherwood (a house in Hastings) the reader is left to decide who the true maker-of-tales is: the magician Aleister Crowley or the mystery writer Dennis Wheatley? Such an ambiguity runs throughout this entire collection. In none of the stories is anyone a ‘master’ for sure; all the main characters are conjurers, invoking fantasies or constructing real-life dramaturgies in which they then attempt to control others (lovers, demons, fables, children) as if they were characters in a movie or on a page. But life isn’t like that. The great power of Volk’s writing is to sustain believable characters while giving a human (sometimes almost supernatural) agency to the unbelievable stories they find themselves in, to the messes they get into, to the plots that are hatched and then grow up into wilful beasts.

Things get out of hand. When the ‘Masters’ lose the plot, then the plots get interesting.

In Whitstable a grieving Peter Cushing is recruited by a young lad to save him from his mother’s sinister boyfriend; but how far is the boy a victim of a vampire, of an abuser or of the fantasies to which Cushing has devoted much of his professional life embodying? And what if all three are true? In Leytonstone the tale begins far more ‘grounded’ – though each novella subtly evokes, in its own way, its location’s unique power of place – working from the everyday roots to the fictions, so when we finally drop into the cell, are trapped in the cupboard, or are alone in the dark of the main character’s head, we are in that disturbing place beyond fiction, under the sway of something that, no matter how much it wants to be good, is incapable of moral character.

In Whitstable, Peter Cushing, the ‘gentle man’ of horror, hovers between saviour and nosy fear-mongerer. His self-defining religious faith is undone by the shakiness of his mission. In the vampire movies, Van Helsing (Cushing’s most notable role) was justified in hammering stakes through the hearts of his victims because they were evidently blood-sucking  monsters; but how certain does he need to be, can he be, of the monstrosity of the trawlerman he is seeking to destroy? Struggling with a personal morality in which Christian and Hammer Horror tropes have become tangled, is the hybrid produced in Cushing’s mind the more likely monster?

Similarly, Dennis Wheatley, in Netherwood, is drawn into a magical conspiracy to save the life of a young child by a decrepit Aleister Crowley, ‘the wickedest man in the world’. How far will a devout author entangle himself in a magician’s transgressive  sorcery in order to do the right thing? Nothing so simple as ‘doing one wrong to do a greater good’ applies here, for Crowley’s ‘magic’ is no simple ‘chaos’ instrumentalism, but a complex and overwhelming otherness, a deep code and an alternative cosmos  full of unearthly agents and languages.

At the base of each of these novellas, despite (and made more deliciously uncomfortable by) the precise detail of Stephen Volk’s telling, is the liminal territory between the real and the imagined, and the uncertainty as to just how far its borders spread. When Wheatley consents to Crowley’s plan, we enter, with him, into a dream-like, obscene, ecstatic wonderland in which what is most dreamy and drug-induced may be the most real, that which remains when the veil pulled away. On the other hand, it may just be the skilfully painted veil...  and then it gets to the next level. Beyond these perceptual ambivalences, to the deep ambiguity of flawed systems-to-live-by.

‘Netherwood’ gives Crowley’s Thelemic magic – “Crowleyanity” – a fair run; an uncompromising travesty of orthodox morals designed to break the thrall of dull repression, to get through to the other side of experience, to what experience hides. It then confronts its ‘Master’ with the damage, and the challenge to mend itself by its own tainted means; while Wheatley’s (like Cushing’s) ‘honest-to-God’ existentialist Christianity (in which good choices tailored to situations are more important than devout observations of ritual or loyalty to creed) creaks under the weight of guilty introspection and flimsy self-righteousness when faced with complexities sat at the border with evil.

All three novellas here – bridging 1901 to 1971 – are set in places that already feel disappointed of any secular utopia; in the absence of a confident humanism, their flawed heroes rely on familial love, protection of the innocent, on goodly wives and a frail – part existentialist and part magical – Christianity. For the characters these unravelling threads just about sustain them above the drop. The terrains of the tales are not so easily accommodated. I am not always the most attentive reader of fiction, but I was held to every word of these stories. Not only by the author’s evident affection for his subjects, and a subtle prose that deftly weaves its snaky plots through descriptions of landscape and props snatched in the moments of transit, but most of all by the circling around an abyss of decision, choice, mistake and belief in a world eating itself from the inside out.