Come Back To Me Then Go Away 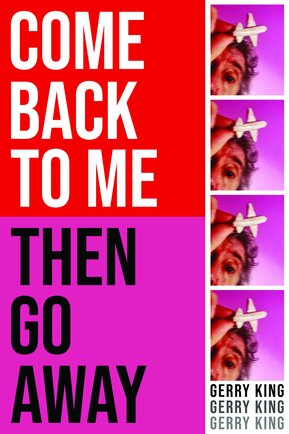 Come Back To Me Then Go Away
Gerry King
Tangent Books

This is a book that’s more important than it thinks it is. It’s all about bliss and incarceration; which is strange for a memoir about never sticking to a trade and just wanting to feel better. But by coming sideways at a big picture, Gerry King stitches up the numinous with everyday practical violence, with boosting and shooting up, and what remains, now things are starting to dissolve, is a stunning road map to where we are right now. There are a lot of mini-obituaries in this book, and some real nastiness from which no one emerges with any credit; but maybe this is the only way to make any sense of the “Half hope, half App”  of the present day? By arranging stories of recent corpses?

Come Back To Me Then Go Away nails perfectly how the oppressive moodiness of the 70s – when everything new was already stale: half-fake, clumsy-smartarse, burdened with the “tearful macho” of a failed older generation – bled into the vacuity of the 80s. King doesn’t critique nostalgia, he crucifies it; conjuring a phantasmagoria of roast potatoes on the bar, smash and grabs, tricksters of the antiques trade, spectres of deep politics and grand narrative through the prism of Torbay.

At the heart of this book is a tale set so far from the pads and studios of the 80s media-based influencers, that you know that this is where the last decades of the twentieth century were really formed: King is getting through chilly nights of peeling potatoes in a clunky industrial drum by downing 40oz bottles of vodka boosted by a local hotel barman, topping off each bag of spuds with “Drywhite, a  chemical that kept them looking white in the plastic bags”; cheated out of a fiver by his boss, King gets his money back by lugging two bags of potatoes by public transport, and then moving the hundredweight in shifts along the roads to a hotel on Babbacombe Downs: “we all had a laugh about it, but I was the one with the wet feet in a freezing factory glugging out of a bottle at four o’clock in the morning, knowing this was fucked up”. The equation of soul-destroying exhaustion and paltry reward over and over and over again; the transgression that brings you back to where you started. King’s repeated escape attempts to break out of a world in which “everything revolved around money” lead him relentlessly, along the “naughty loop” of Temgesic, Diconal, morphine sulphate and spirits, back to cash-based schemes and 57 varieties of gaol. He tunnels out along his veins “to feel better about myself”.

But there are consequences to all this micro-mayhem: a bucket of blood and bits, a mum obscured, a shooting at the club where his ex-boxer dad works. No dodging of the nastiness. King’s genius is for putting together the fragments, for massing details of what was on offer into strings of psycho-social DNA; he has a talent for street choreography and an acute feel for the meaning of architecture learned from burglary. Never more than one step up from subsistence, that’s all King needs to organise things that most commentators want to ignore or glamorise. But he is the socio-biologist of decades that were sold to us as increasingly free, and now, with his organisation of their shrapnel bits, we get to see as structured and determinist.
Only a nomadic outlaw thinker like Gerry King, working beyond shape, committed to the destruction of the unsatisfying, could conjure such a meaningful storm from all the ephemera. It’s like reading a blizzard.

But if you peer hard enough through the onslaught you’ll feel its webs, even when you can’t see them. The web of kindness and down-at-heal mistresses to the crowds of minor celebs generated by expanding broadcast time, the “Stockholm syndrome partnering” of Devonian antiques dealers and their prey, house clearance for an acquaintance of Stephen Ward’s, selling classic vinyl to Freddie Starr, inmates sewing National Coal Board donkey jackets and making headboards for UAE prisons, a porn stash under a carpet featuring a waitress from the night club where his dad works “resplendent” with a strategically placed Babycham bottle, paedophile weathermen, wallets and rings disappearing from care homes, London institutions happy to offer tens of thousands of pounds for an hour long lecture who won’t pay their cleaners a living wage, and all the time surrounded by “people who’d rat on me as soon as look at me to save themselves”. The web of connections/non-connections....  only thanks to King’s marginalised hyper-empiricism do these social splinters coalesce and we get to see the whole gaping iniquity of the pattern of double-cross.

The whole thing to a sound track; for “there is a melody to madness, a musicality to destruction” and King has got the tune down here.