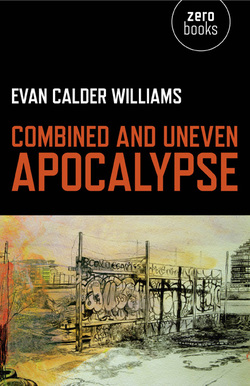 This is a book you can use. Its author, Evan Calder Williams, might seem to be at a disadvantage when advancing his arguments within the complex, carcase-crowded and insecurity-riddled morass of catastrophe narratives – giant storms, ruined cities, morbid plagues, ravenous hordes, but Williams is a Trotskyite-alchemist. He takes the base metal of trash and turns it into precious super-ideas: salvagepunk (post-apocalyptic collage, montage and detournément), shared pain (started from the fubndamental deadness of the world), and, fundamental to his strategies, the twin ideas that a/ we’ll wait forever for a final catastrophe unless we grasp that it has already happened, and b/ that apocalypse is more than catastrophe, it’s a revelation written in its remnants. Taking a/ and b/ on trust, (and a little controlled paranoia helps here) salvagepunk becomes the welcome, depressive, recombining and reconstructing of social relations from the shards of a broken world.

Yet Williams is quick to quash any homely arts and crafts nostalgia or return to green rootedness (exposing the ugly violence within all fantasies of origins or lost naivety). rather, he promotes a reconstruction of the city-idea in its relation to a countryside it has stamped and defined (an idea of city that Williams could develop fruitfully), a working through catastrophe rather than a denial of it.

While Williams occasionally loses sight of the sheer pleasure-giving capacities of what he analyses – storm-porn, sustained global peril, fictional megatonage, terror sublime, elegant ruins – he makes up for any hint of Puritanism with his joy in dark subjects, and his reconstitutive re-rendering of trash into burnished and steely social tools, techne for acting a way out of the most uncompromising, morbid materials to fashion models of resistance, construction and interweaving.

Given the subject area (for some this will be deeply unpromising, for others thrilling, and for the latter there are many footnotes and scintillating asides) not everyone may want to engage with the detail, but for anyone who makes an effort to empathise with Williams’ abject heroes there are more than sublime thrills to be savoured. Evan Calder Williams has more very good ideas about catastrophes, zones, animals, monsters, ecology, groups, labour (dead and alive), milieus, trickle-down lifestyles and the usefulness of artificial desires than we have any right to expect from anything between two covers. This is a ruptured and spilling bank of ideas to be plundered.