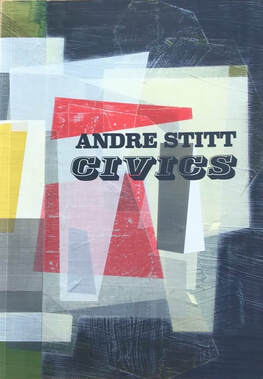 This is a book of grainy and uneasy fables. Solid, modern and yet already eroded and ruined. The tale of how “now” became “then” quicker than ever before. How hyper-modernity tuned out instant nostalgia, how the future instantly and insistently curled back on itself.

Andre Stitt, performance artist and painter, rips around the new towns and old-new and new-old times (like mine) scouring the indifference and lichen to get at the authentic aggregate, the homogenous mixture, the messed-up essence from which the smooth future would be made as a “continuous present”. Stitt’s knowledge of the performing body is necessary for his quest; an unearthing and enquiring into the meaning of the brutalist (for the softest of reasons) sculptures and murals that were the soundtrack to the lives of adolescents like me; every bit as clumsy and misunderstanding as we were.

Now they are “lost”, forgotten, “quasi”-monumental. I remember them as cave-like, unyielding and uninviting. An ancient-modernism that never spoke to me; these were monoliths I rejected, all part of the modern-anachronism that I hated and had somehow had found myself caught up in, turning that hatred back on everything. Egalitarian in alienation. Stuff the trouble your Mum and Dad might give you, it was the elite modernists who really fucked you up with their bloodless vision of what you and everything else ought to be. And the way they incorporated kids like me; I wanted to defend modern art from reactionary uncles, but I had to do it on the basis of these concrete things I had no feeling for. I wanted to defend dream-art, Ernst, de Chirico and so on, but they were synonymous with Sunday Times Magazine adverts by then. So I had to do with concrete that turned passion and rebellion into obligation. I find it hard not to hate the things that Stitt and others write so well about here.

It is rare for it to feel tough to review a book; and a good book. But such is my raw identification with the ambiguous alienation/identification with the concrete walls and altars – the sculptures of the likes of William Mitchell and Mike Cumiskey – the motors of societal and self-definition by abject-utopia, that is no easy read, no easy reflection.  I suppose I can laugh at the idea that these concrete pseudo-ritual structures somehow “produce an earthy, everyday style for the use of the proletariat” (Rayner Banham); for nothing could have been less earthy. My earthy relatives hated them. They drove them from Coventry city centre; they kept them frightened as part of other moral panics, confined them in their over-imaginative hom(ogenous)es.
And yet this is a fabulous book. Again and again it offers insights into the significance of concrete’s texture and texts; how its mixture was “used to establish a topography for an imaginary future”; ‘imaginary’ here in the sense of a lie borrowed from useful fools. Everything is useful in the concrete world. For these works were not of a time out of time, but of a time drained of what modernism lionised. These were spectacles in which there was “endlessly waiting for something to happen”, in which progress was stasis.

Such is the nature of its abject content that this book is far more important than it lets on. Like a 70s encounter with skinheads, there was nothing worthwhile about it, except if one escaped. Such is the odd exhilaration of reading the fine prose here. Passing every day concrete things that looked like they were awaiting a human sacrifice (an image learned from some racist movie) was a kind of low current shock therapy. Restarting, beginning again from zero. These cement things were excellent accompaniment to one’s own mediocrity. To somehow escaping and getting away with stuff, to somehow finding that the institution had decided that one’s failure at exams was now a “transition”, or being saved by the last twitches of the welfare state.

So, like Stitt, I am not cynical. I am still lying, duplicitous, dodging and unstitching, unravelling in order to get by with minimum attachments, still just getting away with things. Learning all the wrong lessons. The only hope to dissolve into the artist’s impressions of new estates and re-emerge three weeks later with clean cuffs. The whole abject thing accompanied by so many trees. Spaces that almost no one noticed, let alone acknowledged. Education was learning how to make a deserted square from a desiring body. Success was its opposite; and the colour plates here of Stitt’s interventions are testimony to transformation, to an alchemical mediation of bland materials into agentive concepts and disruptive patterns; things that were only present then in declarations, not in the work I saw. Yet, Stitt somehow drags them up, in the face of meanness like mine, re-establishing a faith in becoming over the crimes committed in its name.

Which brings me back to where I started. Experience, from which there is no salvation. Exhaustion and fatigue are just exhaustion and fatigue. Yet change comes: something at first romantic and then  flattening and plateau-like. Enjoyeding the arid and concrete as counter-point, seasoning for the fecund; finding a forest in Stitt’s sweating body; rather than an apostle. Rather than flesh describing an absence, this is flesh describing itself; beginning the first step to the human stepping away and into concrete ruins and the lichen taking charge.