City Without A Head 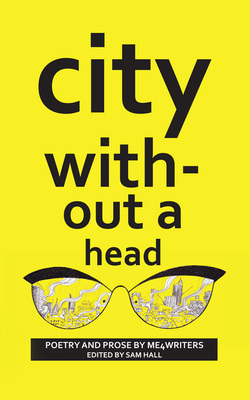 City Without A Head
Edited by: Sam Hall
2011, Wordsmithery Books

One way to map a city is in a sprawling novel of characters. Another is to weave writerly trajectories of obsessive detail. But City Without A Head has no narrative, design nor geography that is grand. It is a thing of uneven miniatures, its scale shifts uneasily around small. It seeks the molecular level, the chipped letters in the urban alphabet, each entry struggling towards some noun, occasionally getting up towards a phrase, but there are no sentences with verbs here. This is a city that does not do, or suffer, or change; instead, its parts fall into place like small dead meat on an ocean floor. This is starting again, not from scratch, not from the screen wiped clean, but from wet dust.

There are fragments of a dystopian future that is almost always here; of paté that tastes of Willesden, “incest weeklies”, services run by “Norman Bates with a budget”, “ominous cellos of austerity”. In the new estate the pavement ends twenty feet either side of the bus stop; where “the impossibility of walking become complete” the only thing to hang onto is each other and yet under conditions of psychic tectonic shifts atrophying “islands of humanity” are pushed ever further apart. City Without A Head is, in grit, what Debord theorised as the pervasive “separateness” in a spectacle.

There is, however, a kind of hybrid landscape here, which in its multiplicity suggests a salvation through juxtapositions of errors and accidental collisions: the statues mistaken for potential suicides, a “Thing” to come face to face with, the bags fluttering in branches. One of the writers here describes themselves as a mythogeographer and in the whirl of disconnections there is an alternative and unsentimental rhythm of despairing of despair, of memory so lonely it demands to be re-visited, of a shadow city unglued, a city that no longer needs heads, a civil body without the organisations of the organic, a bypass that requires a bypass. Hints there are here of an emerging ambulatory accelerationism.

For all its granular qualities, like a non-specific disease, this book is not particular about place. There is no escape; you may get on the night bus, but that does not mean it will take you anywhere: “Smoke rises from the floor, they clap and sing. We arrive in Tangier, but I swear we never left our seats.” Space, headless and unglued, is the place.