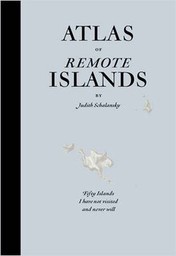 Judith Schalansky grew up in the GDR ‘travelling’ through her maps, expecting to live a life behind borders, tracing the routes of adventures, her finger moving across the coloured paper. When the Berlin Wall was hauled down in 1989 her now reformed schooling brought her new maps of distant but ‘familiar’ places; all maps became questionable for her. The austere maps of Atlas of Remote Islands have a calm, but arid quality, almost aggressively enigmatic; refusals to express the abusive ‘treasures’ buried there.

Perhaps it is the natural border of the ocean that has poisoned so many of these island communities. Schalansky describes the many instances of utopians who have taken that border as equivalent to the walls around the city of ‘no-place’, and the consequences of principle and confinement. She notes the systematic abuse of women and children by half of the adult male population on the Pitcairn Islands. These are small parcels of land where “[P]eaceful living is the exception rather than the rule” where “human beings travelling far and wide have turned into the very monsters they chased off the maps”.

Each map – the islands themselves like fragments of moonrock sitting in pages of unruffled grey-blue –is accompanied by a short narrative “appropriated... as sailors appropriate the lands they discover”: an expected female flyer does not arrive, ants blind crabs with acid, the final grenades of ‘Operation Wunderland’ fall, the engines of the Space Race are heated and tested, a sailor is engulfed by penguins.

The names alone: Lonely Island, Possession Island, Disappointment Island... these are places real and unreal. Schalansky maps her own loneliness, possession and disappointment. Her realisation that maps distort a curved world, their aridity inspiring the utopian and the coloniser: “When asked what was on the island before he set off, he replied, Nothing. And that is the beauty of it.” It is about islands that discoverers have fatally fantasised that “they had not merely found new worlds but actually invented them”. It is that terrible ‘empty’ beauty that dimly and threateningly exudes from Schalansky’s maps.

This could easily have been a simple whimsy, a little pastiche for the ‘theatre of the world’ - Schalansky notes in her wonderful Preface that while an island makes a “natural prison” it also “offers a stage” - but there is something more bitter and driven here, a discovery by Schalansky herself that the fantasies of her childhood were already colonised, that “[O]nly when a place has been precisely located and measured can it be actual and real. Every map is the result and the exercise of colonial violence.”